Bricks and mortar philanthropy the key to medical research funding

A report undertaken by Deloitte released in late October, by the Australian Society for Medical Research (ASMR) has revealed that Australia is suffering a serious medical research “brain drain”.

The report says that almost one in four scientists were “uncertain” about their future employment due to difficulties in securing funding for their projects.

This is not just bad news for Australia’s academic, educational and commercial competitiveness, it also points to Australia’s inability to respond to future health crises.

“Over time Australia’s ability to respond to chronic disease, pandemics and other health threats will be diminished, due to lower levels of innovation,” the report says.

So how will Australia address this imminent threat to the future of our health and medical sciences sector?

If we look to the US, the world’s most lucrative medical research nation, it seems “bricks and mortar” philanthropy is the answer.

According to Giving USA 2015: The Annual Report on Philanthropy for the Year 2014: Americans donated an estimated $358.38 billion to charity in 2014, of which many were “large gifts” to medical research.

But because of the many unknowns and intangibles in medical research, big donors like to put their dollars into buildings rather than blood tests.

Boston’s Broad Institute is a great example of how seed investment in infrastructure has led to ongoing medical research funding – built and launched in May 2004 from a generous founding gift of $200 million from Eli and Edythe Broad, it was a subsequent gift of $400 million in 2008 that gave the program permanency.

When it comes to bricks and mortar philanthropy, one-upmanship is also a significant motivator.

The former La Jolla Cancer Research Foundation in San Diego, California, recently changed its name for the fourth time in 40 years to acknowledge the generous donations it has received from several local benefactors – from the Sanfords to the Burnhams, it’s most recent $100 million gift from philanthropist Conrad Prebys has resulted in its final triple-barreled name, the Sanford Burnham Prebys Medical Discovery Institute.

In Australia, medical research relies heavily on taxpayers. Initiatives such as the Federal Government’s Medical Research Future Fund (MRFF), promises to raise an extra $1 billion a year for medical researchers from 2018 onward.

Roughly $800 million is allocated to the Medical Research Endowment Account in the Federal Budget each year – allowing the National Health and Medical Research Council (NHMRC) to allocate grants to our nation’s top researchers.

But that doesn’t mean philanthropy doesn’t play a major part in ensuring ongoing support for medical research and infrastructure in Australia.

According to Research Australia chief executive Elizabeth Foley, Australians donate $400 million a year to medical research, but as that only makes up 10% of the nation’s total charitable bequests, there is plenty of room for growth.

Strategies such as bricks and mortar philanthropy are timely to grow the size of the funding pie, and the good news is, it’s catching on in Australia, with an increase in privately funded research institutes and programs.

Two new centres have recently been established at the University of Sydney: The Poche Centre for Indigenous Health and Lambert Initiative, as a result of philanthropy.

Established and funded by Greg Poche AO and Kay Van Norton Poche, along with their friend and co-founder, Reg Richardson AM, in 2009, The Poche Centre for Indigenous Health has been gifted more than $50 million over the past seven years.

Similarly, philanthropists Barry and Joy Lambert became known as “Australia’s most generous grandparents” after establishing a research program into medical cannabis, in the name of their granddaughter, Katelyn Lambert, who suffers from Dravet syndrome.

Discovering that cannabis is an effective treatment for pediatric seizures, the Lambert family donated $34 million dollars to Sydney University to establish the Lambert Initiative, which is dedicated to discovering the healing properties of cannabinoids.

Speaking with 60 Minutes last month, Barry Lambert said that while the donation was initially a response to his granddaughter’s condition, their generous contribution has become more about finding answers and making a difference.

“It’s not just for Katelyn, this is for a whole range of various conditions,” Barry said. “We’re just doing what’s right.”

Director of Hames Sharley’s NSW studio, Aldo Raadik, who is working with the Tertiary, Education, Science & Research portfolio and Lend Lease on redesigning laboratory spaces and animal houses for the Lambert Initiative, said that it has been an incredibly positive project to work on.

“The Lambert family has been very generous, putting a significant amount of their wealth behind solving a problem, or a number of problems, that will extend far beyond their own family,” Aldo said.

“Fundamentally, when it comes to research, the buildings are just the enablers of what’s to come. It’s a humbling experience where the quality of our work enables others to flourish in their endeavours to create better lives. Passion has become the driver and everyone working on the project feel like they’re contributing to something bigger and more important than the nuts and bolts.”

Head of the Lambert Initiative, Professor Ian McGregor, said that such a generous donation has been life-changing, not only in terms of the research but also for the research facilities and those scientists working on the project.

“It’s quite transformational in terms of my life – scientists in Australia tend to scratch around from one grant to the next,” he said.

“With this money…I’d like to think at the end of this process we’ll have two maybe three new cannabinoids drugs on the market. One of them will be for pediatric epilepsy, one for pain, and I’d really like to have one for dementia as well.” 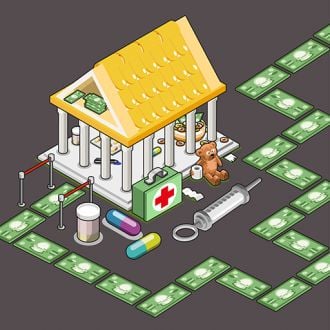