Measuring the value of biophilia

Introduced by German social psychologist Erich Fromm in 1964, the term biophilia defines the psychological orientation of being drawn to all that is alive. Put simply, it means a love of natural systems or love of life.

The term was extended in 1984 by Edward O. Wilson, a biologist, naturalist and theorist who suggested that biophilia describes “the connections that human beings subconsciously seek with the rest of life”. He proposed that biology is the reason people hold a deep sense of love and affinity with other life forms.

Why is Biophilia important?

During a recent lecture, environmental design consultancy Terrapin Bright Green’s founding partner Bill Browning asked his audience to imagine their favourite place to relax in and de-stress. He then asked everyone whether this place was outdoors. The simple rise of every hand revealed people’s instinctive connection with nature and how the modern built environment has created an abstraction from the natural environment. Psychologists have theorised that not only are people innately attracted to natural patterns and settings, but that having contact with nature in the built environment has increased employee well-being, engagement, and workplace efficiency.

Thus far, biophilic design has largely been studied in the context of education and healthcare facilities, but many of the findings are clearly applicable to all types of facilities. Recently, however, researchers have begun to study how biophilia might be applied to other building forms such as workplaces, the home, even gyms due to its ability to enhance psychological well-being.

Sustainable initiatives such as Green Star and NatHERS in Australia and LEED internationally, are encouraging the industry to quantify benefits of avoiding pollutants, namely, airborne particulates, carbon dioxide and extreme micro-climates.

Expanding this appreciation further to integrate ecological economics, illustrates how biophilic design becomes crucial to societal economic welfare; if nature thrives, people thrive. Ecological based economics examines the value of an asset as well as what it creates, both tangibly and intangibly. It infers that people’s needs cannot be simplified into one measure of utility, taking a greater philosophical approach to value that synthesises science and economics. Science demonstrates how harm to a significant ecosystem has an equal ethical seriousness to that of humanity’s right to exist.

Despite this, environmental economics still struggles to produce a measurable profit in the market economy, as some benefits don’t translate to a market value.

The social and environmental value of nature in urban settings has been thoroughly investigated, however, the economic conversation is still lacking as we continue to estimate the value of biophilic urbanism.

Biophilic economics, which is the services or benefits people gain from green elements, has become a critical talking point regarding the economic role of green urban settings. For instance, reuse of treated wastewater or automated driverless garbage collection, not only offers an aesthetic benefit but also provides a cost-effective solution to reduce the pressure of an urban setting.

By introducing the term ‘biophilic economics’ to our conversation about green infrastructure, we can begin to articulate the vast variety of opportunities available within our urban cities, to replace what is known as urban dead space with living ecosystems, offering substantial environmental, social and economic potential. Additionally, we can build upon current research to create a stronger public appreciation of the benefits of biophilic design for tenants, government, building owners and the surrounding urban community, not just socially and environmentally, but economically also.

Leading, international, biophilic city precedents include Birmingham, United Kingdom; Milwaukee, Portland and San Francisco, the United States; Oslo, Norway; Wellington, New Zealand; and Singapore. Singapore has implemented a revolutionary regulation called Green Area Ratio. When a new building is built in Singapore it must include living plants on roofs, terraces and balconies to total an area larger than the footprint of the building. Now we see buildings in Singapore that have Green Area Ratio of three or four times the footprint of the building.

Local Australian projects include Canberra’s City Walk, which will establish a grassed and tree-filled parkland precinct; the Grow Together Project, also in Canberra, which will include several different gardens to provide fresh, organic produce for community-based childcare centres; and Chippendale Green, a $4 million, 6400-square metre green space at the heart of Central Park in Sydney. 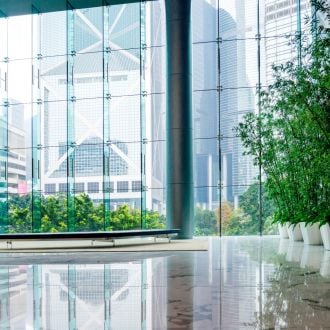