Darren Bilsborough explores biophilic urbanism as a way of increasing quality of life without increasing tax. This article was originally published for Architecture Australia’s 2013 Dossier on urbanism and sustainability, however, statistics have been updated to reflect trends in 2018.

The big stories post the delivery of the federal government’s 2018 budget were related to how the government would maintain current spending levels while dealing with the consequences of an eroded tax base. Popular commentary around this subject contends that the government should run a balanced budget or that there should be a return to a budget surplus.

Notwithstanding the complexities associated with any discussion around economic policy, perhaps a more constructive conversation would be one that focused on the opportunities that might exist for improvements in the nation’s competitiveness and the wellbeing of its occupants, while simultaneously increasing our revenue base and reducing our cost base.

The concept of biophilic urbanism (biophilia being a term used to recognise our basic human desire to connect to nature) may well provide us with the means to access this opportunity without increasing tax rates, instead achieving savings through improved efficiencies in the delivery of essential services and engendering increases in productivity.

It is worthwhile at this point to reflect on the then treasurer Joe Hockey’s speech to the National Press Club at the release of the Intergenerational Report 2015, a report that is generated every 5 years to assess the fiscal and economic challenges Australia will face over the next forty years. Hockey spoke of a “fiscal gap” and made the following points:

We are on the verge of an ageing population boom, not an ageing bust…. [this] change in demographic structure will have important implications for the tax base and how future governments will fund the services the community needs and expects. And:

…we need to ensure that we can pay for today, and we also need to ensure Australians will be able to afford our future. We are currently living beyond our means.

In May 2014 the Australian Bureau of Statistics updated Measures of Australia’s Progress (MAP), a collection of key indicators that help to answer the question “Is life in Australia getting better?”

The figures showed that although Australians have a higher income, an increased life expectancy and are better educated compared with a decade ago, the number of threatened plants and animals increased over the last ten years, as did total net greenhouse gas emissions.

However, and with reference to the forecasts within the Intergenerational Report 2015, these improvements in living standards come at a cost to the nation due to provisions in health care and education being made without a foreseeable increase in revenues. Compounding this issue, MAP reported, is a decline in productivity.

Additionally, in March of 2013 the Productivity Commission (PC) released the final report and recommendations that came out of the Barriers to Effective Climate Change Adaptation inquiry. Two key points relating directly to the governance of our cities and extracted from the PC’s recommendations are: “If there is a high degree of confidence that reforms will deliver net benefits, they should be implemented without delay” and “The Council of Australian Governments should commission an independent public inquiry to develop an appropriate response to managing the risks of climate change to existing settlements.”

Given that it is our cities that power our economy, producing at least 80 percent of our GDP and housing almost eight out of every ten of us, a real opportunity exists to focus on innovative planning within our urban environments as a means to solving the plethora of problems we face in the years to come, including rising health costs, a continued decline in productivity, adaptation to future climate change and decreasing biodiversity.

So what if an innovative urban planning model existed to enable our cities to be part of this solution and to positively influence the nation’s balance sheet and, in doing so, increase our global competitiveness and potentially further accelerate this through the attraction of social and financial capital, to act as multipliers for future economic growth?

By combining our biodiversity challenges with the threat of future climate change, it is possible for our cities and precincts to be planned, designed and built to take account of a number of our adaptation challenges, in particular those associated with water, rising temperatures and food production. It has been suggested that “urban greening” provides an environmentally benign and politically expedient means for our cities to adapt to future climate change.

The physical greening of our cities and precincts will also have the important role of combating the “urban heat island effect,” which makes cities hotter than surrounding rural areas. By cutting the amount of heat-absorbing surfaces and providing cool shade, greening helps cool cities. That pays off in terms of lower demand for air conditioning, less energy use and fewer infrastructure requirements.

Additionally, our future intergenerational challenges of health costs and declining productivity can also be addressed through the adoption of the principles of biophilic urbanism. Research suggests the following health benefits will apply:

Contact with nature has been found to enhance healing and recovery from illness and major surgical procedures, whether through direct contact (e.g. natural lighting, vegetation) or representational and symbolic depictions of nature (e.g. pictures). People living near open spaces report fewer health and social problems, whether they live in a rural or urban residence, and regardless of their level of education and income. Even the presence of limited amounts of vegetation, such as grass and a few trees, has been correlated with enhanced coping and adaptive behaviour. Office settings with natural lighting, natural ventilation and other environmental features result in improved worker performance, lower stress and greater motivation. Contact with nature has been linked to better cognitive functioning on tasks requiring concentration and memory. Healthy childhood maturation and development has been correlated with contact with natural features and settings. The human brain responds functionally to sensory patterns and cues emanating from the natural environment.

Biophilic urbanism promotes the physical greening of our cities and as a result an inevitable move away from car dependence. The biophilic city absorbs more carbon than it emits and is a place that literally breathes life into its surroundings, positively influencing its local climate and contributing to the total wellbeing of its inhabitants.

Most importantly it is a city that can provide greater economic productivity through a healthier workforce and more efficient use of natural resources and financial capital for essential and emergency services.

This is the type of constructive conversation, innovative thinking and application that we need. We need to change the way we do things and envisage what might be by looking at a future through the lens of opportunity as opposed to the microscope of spending cuts and counting paperclips. 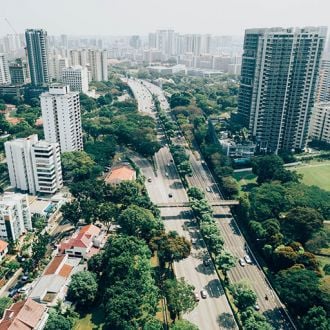