Incentivising and Controlling Population Growth is the last in a three-part series drawn from the discussion.

Hames Sharley’s thought-leadership roundtable came to an agreement that the key factor in the population debate is equal opportunities. While some Australian states and cities boom and expand rapidly, others progress at a slower rate. So, do our policymakers and society as a whole need to look carefully at putting measures in place to equally or evenly spread change across the country?

Australia doesn’t have a population policy, and actually never has. In 1945, the governmental message was that of ‘populate or perish’ and a two per cent annual growth target was set for the quarter century that followed. This remains the closest Australia has come to a policy, with immigration numbers giving Australia’s future the solid foundation upon which it stands today.

There is the tendency for conservatives not to embrace the Big Australia movement because it relies upon an increase in migration numbers. But Big Australia is nigh: more than half (54 per cent) of Australia’s population growth is from net overseas migration; the rest from childbirth. Migration is not solely for the purposes of safety and reuniting family – it is also important for building our economy, shaping our society and supporting the labour market.

Currently, the Australian government offers 186,515 migration places each year. Of these, 28,850 are sponsored by a particular state, territory or region – the other 161,150 immigrant places are not state-specific. In 2017, the Northern Territory had the slowest percentage of population growth of all Australian states, followed by South Australia and then Tasmania. Predictably, Victoria is the state experiencing the fastest rate of growth. This has resulted in an uneven spread of the populace across the country.

As this begins to be recognised, many are calling for government intervention to help strategise better distribution. A paper by Infrastructure Australia, entitled Future Cities: Planning for our Growing Population, argues for a policy-driven approach, as current trends could have disastrous consequences for cities such as Sydney and Melbourne.

So, what can be done to boost the population in other areas?

Currently, there are infill projects happening in all states, one example being Connect Joondalup in Western Australia. These projects aim to reduce urban sprawl and create density in particular areas that will be linked to new transport systems and infrastructure (in the case of Connect Joondalup, the Perth Metronet).

Locally, there are many rural towns creating their own strategies to entice residents and create self-sustaining economies. Among the interesting marketing and rural-living incentives outlined by the Regional Institute of Australia are:

But the consensus among the thought leaders at Hames Sharley’s roundtable was that the issue needs to be prioritised at a federal level, rather than a state and local government one.

Our discussion participants agree that it is important for something to change because current cyclical trends are causing mass disproportions, particularly in Melbourne and Sydney, where strains on infrastructure and housing are cause for concern.

Most western countries do not have a population policy but, unlike most of them, Australia has a substantial and long-term migration program. It also ranks within the world’s top ten countries receiving migrants as a percentage of the total population. If some kind of government incentive for planned distribution is not created, the very real fear is that cities like Darwin, Adelaide and Hobart will be left behind economically as our eastern-state metropolises reach bursting point.

Caillin concludes, “It is essential that a careful balance between policy and actions is found. While skills in assessing and addressing population growth are well established, a holistic and sustainable methodology to the design and development of areas with declining populations must be mastered. It is incumbent upon practices like Hames Sharley to champion this measured approach”.

Did you miss Parts One and Two? Follow the links to learn more about how this conversation began. 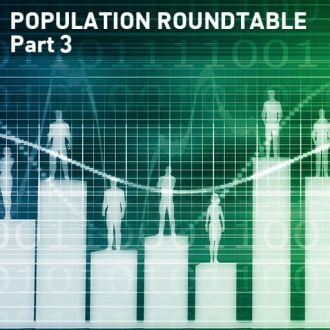