Transparency in Population-growth Data is the first in a three-part series drawn from the discussion.

Our conversation begins with the reminder that there is no single, effective way to plan for population growth, but that it is important to view the situation through a positive lens. In Australia, population growth is inevitable. It will bring many opportunities and challenges to our country, including greater economic prosperity, more jobs and the requirement for adequate infrastructure to service a rapidly expanding society. It is the myriad ways in which our governments, city planners and urban designers approach population growth that will determine where Australia sits on the world stage in future years.

The positive opportunities that population growth present appear to be contrary to what the Australian media would have you believe – reports often frame population growth as problematic, stating that the country is ill-prepared, or that greater population numbers could kill the Australian dream. This short-sighted and somewhat pessimistic viewpoint is perhaps a reflection of the current political climate, in which alarmist headlines and fearmongering sell newspapers.

Australia’s population is expected to grow by 11.8 million people by 2046 – the equivalent of adding a new city roughly the size of Canberra each year for the next 30 years.

Three-quarters of this growth is expected to occur in Melbourne (2.7m), Sydney (2.6m), Perth (2.2m) and Brisbane (1.6m), with Melbourne and Sydney locked in a race to become Australia’s first megacity. While some are optimistic about this vision of the future, others are less so.

“The increase in population should come with an increased understanding of what new requirements will need to be met,” says Yaara. “All kinds of sustainability and resource issues will arise, and it is vital that the importance of this is outlined by becoming an integral part of everyday industry discourse.”

How increased transparency could make a difference.

Information and data relating to population growth do exist, but perhaps it is not as widely distributed or as fully understood as it could be. The opinions formed on statistical data projections cause many types of opposing views; depending on which agency filters the information, we often see panic, scepticism and concern about our country’s future.

At Hames Sharley, we utilise all kinds of data to inform our designs. Whether it be demographic information, purchase information or future predictions, we try continuously to keep our finger on the pulse and be prepared for these changes. For us, the Australian Bureau of Statistics is a common source; aside from that, however, there are few resources that are public or provide information that is easily digestible for all industries and the wider public.

So, we posed the question as to whether greater transparency can help better decision-making. In Qatar, the government has launched a website that showcases the country’s population policy, growth and trends. The country’s Minister of Development Planning and Statistics says that he hopes the site will provide a resource by which government institutions, planners, designers and other industries may sit on the same page in the pursuit of sustainable population development.

“The Qatar Government website may be considered as somewhat of a marketing tool to encourage the public to jump on board with the government’s future vision,” suggested Caillin, “with statistics filtered and presented in a format that is favourable to the policies that they are already putting in place.

“It is proposed this will result in a better outcome than fearmongering from news outlets, but it could also have negative effects.”

“Statistical transparency and trend predictions could be useful in Australia, but they could also cause some issues by exacerbating trends,” Tim added. “For example, they may encourage geographical population shifts to more ‘prosperous’ cities like Melbourne, which is widely reported as the new boomtown, resulting in increasing numbers of people moving there.

“The act of reporting upon a trend creates a snowball effect as others follow. It can almost be viewed as a self-fulfilling prophecy. This then brings about further issues such as housing affordability, traffic congestion and so on. But perhaps this could be better balanced with population incentives and policies in places with lower population levels?” (This will be explained more in Part Two.)

As to whether increasing transparency and educating the masses with greater statistical data could have a positive impact for both industry and community, the group resolved that if a careful balance is struck, policymakers, planners and designers can be better positioned to respond to politically filtered empirical data. 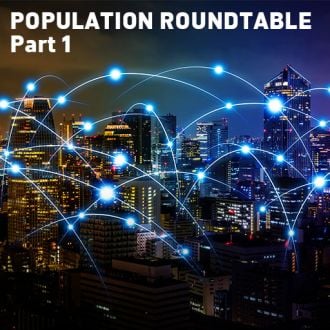