Shifts in Population Growth is the second in a three-part series drawn from the discussion.

In Part One, we discussed how transparency in population-growth data can either lead to better decision-making or become a reactive burden to policymakers and planners, whereby behaviours are driven not by what’s happening but by being told what may happen. For example, there is a current shift of people from all around Australia moving to Melbourne and Sydney. This is partly for the big-city lifestyle, and partly for the opportunity – or the promise of opportunity – these places bring. As a result, both cities are booming, with populations in other parts of Australia left to diminish and decline.

It is interesting to note that, in a bid to tackle the surge in population for Sydney, the Greater Sydney Commission has released a strategic vision for a polycentric city, in which the CBD would be paralleled by two other cities – a plan titled A Metropolis of Three Cities. However, recent surveys suggest that people don’t want more cities; instead, they want nodes or urban hubs carefully dotted around our capitals.

“It is important for creators of the built environment to allow people to prosper in all places, not just in the city,” Caillin points out. “This continued shift in population will have the cities at bursting point and leave rural-urban communities and other capitals dry.

“Professionally, we’ve recognised this through several city, suburban and rural master-planning projects, including South Australian Principal Urban Designer Andrew Russell’s contribution to the Make it a Plan Adelaide report, released by Deloitte. This report highlights the changes expected to occur in Adelaide by 2027, and how the city can improve and create job opportunities, housing choice services and amenities.

“The same goes for Serpentine Jarrahdale 2050 Vision, which is indicative of many other cases around the country where young people had been forced to leave the rural-urban centre to look for opportunities because there are currently no structures in place to facilitate personal growth in the region. At its extreme, this is not only the case with young people but with the ageing population also.

“Alarmingly, by 2022, Australians who have reached retirement age are predicted to outnumber children [under the age of 16]. This will significantly reduce the number of taxpayers, so there are also some policy issues that are raised with this, as well as challenges for the built environment.”

For these reasons, Tim Boekhoorn believes it’s fortunate that this population shift appears to be well thought out. He explains the current focus on restructuring aged care in Australia.

“Ageing in place refers to a person having the choice to live in their place of residence for as long as they are reasonably able,” he says. “It’s tremendously satisfying to see that many cities and towns are developing strategies to accommodate this, including the Serpentine Jarrahdale area.

“Furthermore, another transformation is occurring in the retirement-home model, with vertical structures being built to allow for retirement in high-density areas; a shift from the village to a multi-storey apartment complex.”

Population surge metrics measure short-term arrivals, not just permanent residents, something Yaara concludes is important because it is a more accurate reflection of the population.

“This is particularly true within tourist hubs and university towns, as such a surge will incorporate the large number of people categorised as travellers and international students. It will also account for changes needed for the built environment, such as hotels and university accommodations.”

Australians tend to congregate around cities. More than 85 per cent of us live in urban areas, and nearly 70 per cent of us call our capital cities home – these statistics make Australia one of the world’s most urbanised countries. Now more than ever, Australians are making the move to Melbourne and Sydney, causing a variety of housing affordability and transport issues while moving us ever closer to one of the two becoming the next megacity.

It is therefore increasingly important to allow communities to prosper outside of these areas. This highlights the importance of planning nodes, hubs and centres, as the trend of transferring to the city remains unsustainable. Would it help if the Australian Government encouraged a more equal spread through stronger and incentivising policies? This is something that we outline in Part Three, Incentivising and Controlling Population Growth.

Did you miss Part One, Transparency in Population-growth Data? Click here. 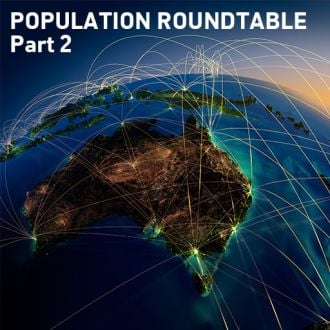