Rem Koolhaas to transform the KaDeWe

Berlin’s famous Kaufhaus des Westens department store, commonly known as the KaDeWe, will be undergoing an architectural transformation in 2016, according to an article by Paul Keskeys in Architizer.

Originally the brainchild of Adolf Jandorf, architect Johann Emil Schaudt was commissioned in 1905 to construct the iconic building, which opened in March 1907.

Touted as the largest department store in Continental Europe, the KaDeWe has eight floors comprising 60,000 square metres of retail space, attracting up to 50,000 visitors daily.

Housing Germany’s biggest luxury shoe department, and “two football fields” of gourmet food on its 6th and 7th-floor delicatessen and restaurant, it’s the kind of store you could happily spend an entire day perusing.

Dutch architect Rem Koolhaas and the Office for Metropolitan Architecture, led by Associate Alex de Jong, will take on the monumental task of transforming the KaDeWe, while still keeping its turn-of-the-century charm.

To see recently published images of the project visit: http://architizer.com/blog/oma-kaufhaus-des-westens/ 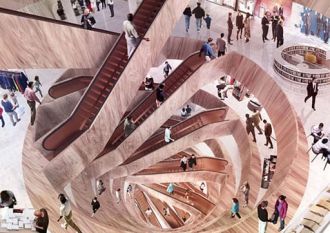