It’s common knowledge that if you want to rediscover your calm you head back to nature. But could it be that we’re too narrow in our view of what we experience as uplifting, and could architecture have the same effect on our mood as parkland?

As one of the 20th century’s greatest philosophers once said, “It’s not easy being green.” Be that as it may, there’s no denying green design principles can have such longstanding beneficial effects that it’s more than worth the effort to implement them.

It’s long been recognised, for instance, that the benefits of green infrastructure go beyond purely environmental concerns such as reduction of runoff, air filtration and the limitation of heat island effect. Ask the man in the street why he takes time every now and again to be the man in the park, and chances are he’ll tell you it’s a good way to de-stress. After all, nothing says “calm” like green. (Click here to learn why the colour green has its own unique psychological effect).

Unless, of course, we’ve been ignoring those nifty shades of grey.

Researchers at the University of Warwick certainly haven’t, arriving at the conclusion that while green space is undeniably important, you can receive just as great a boost to your mental wellbeing by enjoying a view of an aesthetically pleasing building or structure. Using more than 200,000 pictures of sites around Britain, they asked people to rate the images for their scenic value. Somewhat unexpectedly, pictures of St Paul’s Cathedral and Canary Wharf polled highly, while the images judged to be the most uplifting and beautiful were composed more of greys, blues and browns than greens.

While it may seem strange to suggest that concrete and glass can have as great a calming effect as a bushland scene, there’s more than a grain of truth in the idea that we gain as much from a scenic environment as a natural one. Is it too great a leap to consider that the most beneficial urban landscape could be the one that puts the greatest effort into making the most of both?

Hames Sharley’s Senior Associate Rachel Seal doesn’t believe so. She has spent a career in urban design and planning and has long been aware of the positive results from careful cohesion of the built and the grown. “There’s no reason why an urban environment can’t have the same qualities to reduce stress as a natural one,” she says.

“If we can create urban green spaces framed by beautiful and site-responsive architecture and marry the two elements together, all the better. It’s that kind of mix that really makes the city cohesive, right down to the micro level of interior design. Design is concerned with the experience from both inside and outside buildings.”

The problem is that it’s a hard sell, convincing people that a bricks-and-mortar construction can be as uplifting as a view across the ocean. They’ll almost always believe that green is better, even though there’s little by way of hard, scientific evidence to support the idea that getting back to nature has a positive effect on mental health. The fact is it’s enough for us to believe green spaces calm us down: a 2008 study of residents in Adelaide found those who perceived themselves to be in a highly green area had 1.37 to 1.6 times more chance of being in better mental or physical health than those who didn’t.

The trick then is to engender the same belief in people when they think of architecture. In his 2016 book Attunement, Alberto Perez-Gomez argues that architecture should resonate with its location and the people who use it, such that it becomes meaningful and emotional, and thereby places greater importance on our wellbeing. Architecture, he contends, is more than “material ecology”, it’s “a constituent part of our consciousness”.

And perhaps it is as simple – or complex – as that: to continue to create buildings that combine with and maximise the green effect such that perceptions and beliefs alter accordingly. No one is saying that the likes of Perth’s Kings Park or the garden-city character of Adelaide need eventually be supplanted by the built environment, but with the 2011 Census showing that almost 89 percent of Australia’s population is urban, not everyone necessarily has access to open spaces and bushland. That being the case, if there’s reason to believe architecture can be as uplifting and energising as nature, it makes sense to do all we can ensure everyone is at peace in their built surrounds. As we Australian cites urbanise it becomes vital that we design beautiful buildings… and urban spaces between them. 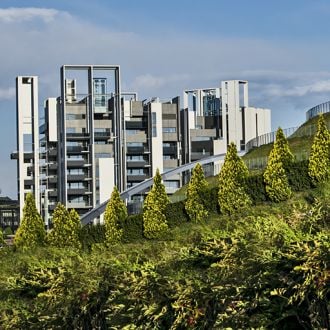