Architect and author Oscar Newman argued in his theory of ‘defensible space’ that an area is safer when people feel a sense of ownership and responsibility for that piece of the community. Furthermore, a successful defensible space will have both physical and social ingredients.

In the 1980s, a group of Danish architects drew up recommendations to shape the physical environment to minimise violence and vandalism on the basis that “Denmark should continue to be an open society with a minimum of physical barring and formal surveillance.”

The result – the Sibelius Estate, near Copenhagen, designed by architect John Allpass – is still considered a model for designing out crime. It is shaped by natural surveillance and creating a sense of belonging with clear delineation of the community and active common areas that include facilities for youth. Frequent maintenance and repair of all public facilities are recognised as an essential demonstration of community care for the place, thereby discouraging vandalism. Electronic surveillance by CCTV is seen as a last resort.

In Australia, these principles have been distilled into Crime Prevention through Environmental Design (CPTED) guidelines and adopted by a wide range of authorities.

As cities become more intense and diverse, issues of safety and crime mitigation have been brought to the fore.

Places where large numbers of people gather, such as shopping centres, education campuses and sports precincts have been identified as potential targets for terrorist activity. Enabling effective emergency and a tactical response is now a key consideration in building resilience into these environments.

Intensity and diversity in cities are also resulting in the loss of unplanned spaces. Jay Griffiths, (author of Kith: The Riddle of the Childscape), argues that children fill the “unoccupied territories” – the spaces not controlled by tidy-minded adults – “the commons of mud, moss, roots and grass”.

But such places are being purged from the land and their lives, she writes. “Today’s children are enclosed in school and home, enclosed in cars to shuttle between them, enclosed by fear, by surveillance … Since the 1970s the area in which children roam without adults has decreased by almost 90% … Childhood is losing its commons.”

American author and urban designer, Jane Jacobs, noted that it is ‘from the sidewalks that children learn’ and that “a fundamental of successful city life is that people must take public responsibility for each other even if they have no ties to each other” (Jacobs: The Death and Life of Great American Cities).

Beyond CPTED: Our role as designers

So, is it enough to simply adhere to CPTED principles to address crime mitigation, and is it enough to limit our thinking about the place ‘resilience’ to being simply disaster preparedness in the same way that ‘sustainability’ has been narrowed to good energy management?

Danish architect, Bo Grönlund, wrote that “You cannot have a completely safe city and a completely exciting city at the same time; they are completely contradictory.”

If we contemplate crime as, in part, being an expressed reaction to the exclusion and discomfort so often present in the public domain then we will shift our focus from the design of physical assets to the soft infrastructure of the city with the objective of creating more social prosperity and a greater sense of belonging.

Before we design, we will find out who – and how people – will use the places we design. We will get “out in the street” and talk to people and ask deeper questions about how our buildings will affect their lives. Open discussion and collaboration at the start of the design process will enable us to agree on specific objectives and parameters for the places and communities we design within.

While the places resulting from the buildings we design are important, Mark Lakeman, a director of the “City Repair Project in Portland, Oregon, stresses that: “the ‘making’ of place is perhaps more important, as it builds connections, creates civic engagement, and empowers citizens—in short, it builds social capital.”

As designers, we have a responsibility to the wider community to consider the impacts the buildings we design have on the people using the spaces that surround them. We should take as much care in the design of these spaces as we do of the buildings themselves. This is where a building engages in a dialogue or partnership with the surrounding community and asks for their acceptance, respect and care.

About the authors: Rachel Seal, Cara Westerman and Shannon O’Shea are architects and urban designers with Hames Sharley’s Perth office. 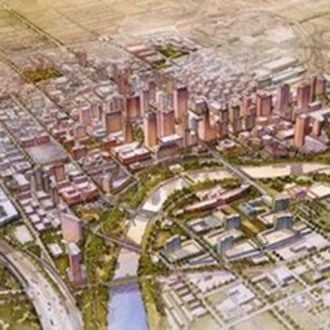