Adelaide has great bones. Its founding fathers planned a city which not only looks beautiful, but is highly functional and extremely liveable. Consistently ranking in the top 10 most liveable cities worldwide, Adelaide is one of the world’s great small cities.

We need to be bold and seize the opportunity to create an even more vibrant and innovative place to live that is proudly local and yet globally connected. Our great natural strengths, alongside strong recent growth policies, have given us a solid foundation for growth. What we need next – according to Deloitte Access Economics – is people. 15% more of them in the next decade, in fact.

Cities such as Sydney or Melbourne might tell us that size matters, but to make Adelaide great, I would argue that shape matters. We need to shape our city in the way we want it to continue decades and centuries into the future.

Importantly, this kind of city shaping is not simply about building apartments to accommodate a larger population, nor is it about increasing urban sprawl.

Genuine urban renewal is about building communities and shaping places.

At our core we are social animals. We all crave for and thrive in rich social environments. Yes, in this increasingly dominant digital age, our lives are curated through a digital lens that connects us to the information, friends, family, places and experiences from around the world. But in my view, we will always crave a genuine connection to real places.

The Bowden Development - of which Hames Sharley is a part - is a good example of how we can reclaim former industrial land for city edge living and community building projects. The development of Bowden has led to the creation of a vibrant inner city community with strong ties to its past, yet creating a fresh community of the future. Adelaide’s locals want to live in interesting places that are vibrant, diverse, connected, community focussed and sustainable, where they have access to jobs, social connection and choice. That’s what great placemaking is about.

Adelaide lends itself perfectly to development along transit corridors along the main arterial routes out of the city.

Some years ago, the Jay Weatherill’s government produced the AdeLINK strategy, which was an attempt to improve public transport in Adelaide. The incoming state Infrastructure Minister, Steven Knoll, has since scrapped the plan, asking the SA Public Transport Austhority to consider ‘anything and everything’ in a new review of the public transport system.

The idea of developing communities along public transport corridors – a key part of the AdeLINK strategy - is not new. Cities such as London and New York are testament to the fact that where there is good public transport, people follow, communities appear, schools build up, and businesses flourish.

I’m a big fan of the concept of the economically and socially diverse transit corridor being a key urban building block as we reshape the Adelaide of the future. With the amount of reuse possibilities in inner Adelaide, such as Thebarton, Greenhill Road and Kent Town, the potential for new communities along transit routes is an exciting way of increasing our city’s population.

The travel demand profiles of Adelaide’s population are complex. I suspect that heavy rail, light rail and buses are likely to be in the mix for some time to come, but that new options will emerge that combine the efficiency of mass transit with the flexibility to integrate personal choice and real-time travel planning.

Does every transit corridor have to have light rail? We certainly know that light rail works in the inner urban context, and I would argue it definitely has a future, but whichever inner urban public transport modes we choose, it will be crucial that the integrity of the transit corridor is sustained and nourished by the public transport choices we make.

Most commentators suggest that autonomous driverless vehicles will become a reality in the mid to late 2020s. It is not too hard to imagine that smart, driverless vehicle technologies could revolutionise what we currently call public transport.

I also like trams! They are congenial, comfortable, convenient, generally quiet and have a kind of innate equity the inner urban lifestyle demands.

Imagine a world with a mix of traditional trams sharing lanes with electric autonomous buses which actually look and feel like small trams – ‘transformer trams’, if you like. They could even gang together as they approach the city to act like a large tram for part of the journey. Heading out of the city they could then separate to become driverless buses towards the end of the journey. The last leg of the journey could become a more bespoke, on-road route dictated by the last few passengers in a kind of dial-in ride share. While there is currently opposition to a tram route along The Parade, the width of this corridor would lend itself to transformer trams.

The key proposition I’m putting here is, whatever smart transport modes emerge for inner urban public transport, the integrity and maintenance of active and socially and economically diverse transit corridors must be ensured.

These ‘city shaping’ corridors are the arteries and the heart and soul of contemporary urban life and must be sustained and cherished at all cost to create a bigger and better Adelaide. 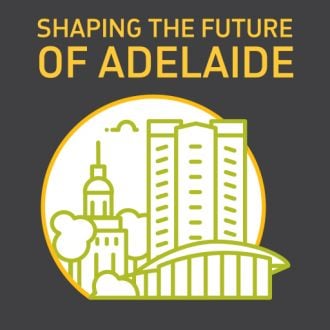