The notion of nodes

Node. It’s a buzzword that of late has become synonymous with urban design. But what is a node? What are its benefits? And what is its place in the Australian urban environment?

We sat down with Chris Maher, Hames Sharley’s National Urban Development Portfolio Leader, and Design Principals from our Brisbane studio, David McCarroll and Jason Preston, to discuss the purpose of nodal design.

What does the term ‘node’ refer to in an urban-design context?

JP: A node is a centralised hub outside of the city. It’s where there’s activity and the infrastructure to support it, such as residential, commercial and retail buildings, usually alongside public transport options.

DM: It’s also characterised by high density, and opportunities to work, therefore avoiding simply becoming a dormitory suburb. It has to be in, effect, a mixed-use development.

Why has the term been popularised?

CM: It’s the way in which Brisbane, Sydney and other urban centres may accommodate population growth. It’s of particular importance in Australia because we can no longer afford to keep spreading outwards. Sydney is contained by the Blue Mountains, by the oceans and by its national parks. So, it can’t accommodate for its forecasted population growth without creating denser nodes to the west north and south of the city. The same goes for other capital cities across the country.

Is designing nodes a new thing?

CM: The term may be relatively new but the concept certainly isn’t. London is many nodes, or a series of villages that grew and grew and then became greater London. Within each one is a focus, a centre of intensification and activity. Is it new? Ah, it’s new for Australia, and certainly it’s new for Perth, which is a city that’s traditionally spread north and south along the coast of the Indian Ocean.

DM: I spent a large portion of my life in Sydney and it has a history of a very concentrated focus on the inner city. If you look at the lifestyle section of the newspapers there, you’d pretty much be convinced that life ceases about five kilometres beyond the CBD. I moved to Brisbane after returning from a stint overseas, and one thing my family said to me about the city is that to really get to know the place, you’ve got to understand it’s actually a city made up of lots of villages. When you work out where the villages are you can start to get a feel for where all the exciting hubs of activity are. Brisbane is not concentrated at all, it’s not city-centric. It’s not about being a centralised city, but a city surrounded by nodes. It’s activity, surprise, joy and delight equal to the more inner attractions, and I think our current Albion project in Queensland is a great example.

What is the difference between living in a node and living in the city?

DM: Well, as an example, I grew up near Liverpool in New South Wales and when I lived there it was basically a completely cultureless desert. But now Liverpool is becoming a place where people make a choice to live in because it’s a node and becoming a vibrant city in its own right. Liverpool is developing its own unique culture, which responds to the desires and wishes of the city’s unique cultural mix. There’s a train of thought that the people who live in the suburbs and those who live in the city are completely different people but those who live out in the suburbs actually want the same lifestyle as the people who live in Paddington, as an example. Nodal development acknowledges that people who live in Sydney, who live in Penrith, live in Hornsby read the same articles and watch the same television programs, have travelled and so have the same access and exposure to a modern urban culture. A lot of that is now being offered to them in the nodal village sense. And that’s actually a terrific thing; it adds a level of desirability to these areas as a choice of place to live.

What is the relationship between a TOD (Transit Oriented Development) and a node?

CM: Having a node that is also a TOD helps. Transport is important because connectivity is an important factor, especially for employment. Ultimately, being able to work and live within a node is ideal, but this cannot always be achieved. Jobs be they in industry, resources, research or education, may be located outside the node. So, it’s good to have jobs in place within nodes but you can’t always achieve that – that’s when transport becomes incredibly important.

JP: It’s also great for connectivity to the city and other nodes as well, to avoid the prospect of social isolation. If you’ve got pre-existing stations or other transport hubs and infrastructure then that should be the first port of call for creating a node. You can encourage densification around those areas rather than starting anew.

CM: Yes, this is completely relevant to the work we are doing in Perth, alongside the Western Australian Government and AECOM around Metronet. We’re looking into the optimum location for the newstations based on where is best for people to live, go to work, shop and entertain. The importance of this was also found in research Hames Sharley undertook for the CityLife Project in Sydney, of which we were the connectivity category winners. The project identified tools to assist in understanding how the ‘cities’ of New South Wales should grow and develop into the future, a Connectivity Measuring Toolkit is now currently being developed.

What are the benefits of designing a node?

JP: It’s great for community wellbeing, due to the connectivity and hub of activity and opportunity it brings.

DM: There are wellness indexes that explores this in depth. They factor in access to public transport, jobs, a variety of age demographics and activities. Nodes tend to tick many of these boxes. [click here to view the OECD Better Life Index]

CM: I think it’s important that, as a society, we don’t have to travel to the city to access everything. You can have that aspirational city lifestyle beyond the traditional CBD but this is one of the many ingredients.

JP: It should also be noted that the idea of creating denser nodes is the more responsible, sustainable approach to designing and planning developments. You’re reinvigorating pre-existing areas, kind of like reusing or recycling, which can only be a good thing. 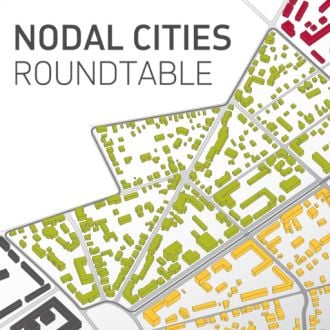