Earlier this month, the population of Australia hit the 25 million mark, with the net number of migrants continuing to outpace the number of births in the country at a rate of almost two to one. For the sake of comparison, that’s a figure reminiscent of gold-rush days.

According to the Australian Bureau of Statistics, we add one person to our number every 83 seconds, with about 400,000 people a year added to the tally since 2015. Keep it up and we’ll bust 40 million in the next 40 years.

The timing of this latest milestone was just a little bit off, however. Those of us who like an amusingly appropriate narrative would have preferred it to come almost exactly four weeks earlier – if it had, it would have coincided with World Population Day on July 11.

Some of you may recall that, to mark that particular global event, we at Hames Sharley organised a roundtable session to talk about world population growth – a topic that seems all the more apt one month on. Our Managing Director Caillin Howard was joined by the leader of our National Residential Portfolio Tim Boekhoorn and Yaara Plaves, a senior architect on the Social Housing committee for the Urban Development Institute of Australia, and together they analysed the issue from three viewpoints: transparency in population growth data; shifts in population growth; and incentivising and controlling population growth. Click through to see what they had to say on a topic whose importance is growing all the time. Literally.

And if you’d like to see the number of people in Australia rising in real time, pop by the ABS, who have set up a Population Clock so you can do just that. 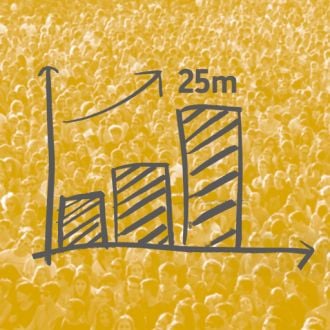