What’s cooler than being ice cold? Being Ice cube. And what do architects and Ice Cube have in common? They all went to drafting school.

In spite of his reputation as a police hating ‘gangster’ O’Shea Jackson (Ice Cube) came from a middle-class LA family and was known by friends and teachers as a smart and diligent student, who loved to write and draw.

And while he had a talent for writing rhymes – which led Cube to work with some of the biggest names in the business at Ruthless Records while finishing high school – it was architecture and drafting that originally caught the rappers eye.

Leaving his family home in Los Angeles for Arizona, Ice Cube attended the Phoenix Institute of Technology, where he earned a degree in architectural drafting before he shot to stardom as the man behind one of the biggest rap albums of all time N.W.A’s Straight Outta Compton – never to return to drafting again.

That is, until now.

In the Getty Museum’s Pacific Standard Time, Art in LA 1945-1980 project video, Ice Cube takes the viewer on a tour of the Eames House – an LA architectural institution.

“Before I did rap music, I studied architecture with drafting, and one thing I learned is that you always gotta have a plan,” he says.

“Coming from South Central Los Angeles you’ve gotta use what you got and make the best of it – that’s what I love about the Eames, how resourceful they are.”

Husband and wife team, Charles and Ray Eames, are two of America’s most significant contributors to the development of modern architecture and furniture design, with their Eames Lounge Chair considered a classic piece of mid-century American furniture.

They also built The Eames House, as part of John Entenza’s The Case Study House Program, which began in the mid-1940s and continued through to the early 1960s.

According to the Eames Foundation website, Charles and Ray Eames designed the home for themselves, a “married couple working in design and graphic arts, whose children were no longer living at home”.

“They wanted a home that would make no demands for itself and would serve as a background for, as Charles would say, ‘life in work’ and with nature as a ‘shock absorber’,” the website says.

So what does Ice Cube – an LA institution in his own right – think of their work, more than half a century later?

“In a world full of McMansions, where the structure takes up all the land, the Eames made structure and nature one,” Ice Cube said.

For a copy of the original design brief for The Eames House, published in the December 1945 issue of Arts and Architecture magazine, go to the Eames Foundation Website. 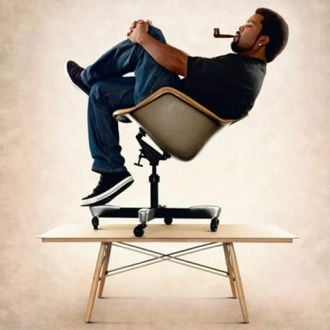