The notion that the identity of a place can lead to it having a measurable value has been a key focus of my research into retail design over the past few years.

As part of our research collaboration between Hames Sharley and the Business and Architecture Schools at the University of Technology, Sydney, we looked at the value of connectivity in retail and town centre precincts – both in terms of economic benefits and indirect cultural and social benefits.

We have undertaken this research because it is our deep belief that good connectivity will drive exemplary city making, particularly when looking at the retail precincts of the future.

The Urban Development Institute of Australia (UDIA) is leading the way by hosting a thought-provoking international competition called CityLife, which asks designers to elevate the quality of research and development in the creation of Australian cities.

Cities are the lifeblood of our economy – which is just as much about our retail assets and town centre precincts as it is about commercial, health, or the ever-expanding residential market.

According to the United Nations more than 54 percent of the world’s population currently live in urban areas, a number that is predicted to reach 70 percent by 2030.

The World Bank estimates that this figure in Australia is currently 89 percent and rising.

This is fundamental to retail growth and delivery in our cities.

The urban population explosion is leading to a number of well-documented issues for cities in Australia, the more common ones being potential future health problems, an affordability crisis, and difficulties in access.

The retail sector will not be immune to this, and like other sectors is in a good position to take on some of the responsibility for improving our cities – by responding to contemporary needs and aspirations of consumers and the community.

If the way we currently plan for and grow, our cities are under the microscope then so too is the way we conceive, design and implement our retail assets.

The UDIA proposes that we work toward a paradigm shift in how we plan and develop our cities for the future.

The three pillars of investigation are liveability, affordability and connectivity.

As finalists in the Connectivity category of the CityLife project, our team of researchers have proposed to create a Connectivity Measuring Toolkit that can capture the direct and indirect benefit of connected systems as they contribute to public life, including retail environments.

This new evaluation tool can provide evidential justification for future investment in the urban realm and its assets.

It will be of benefit to both the public and private sectors – particularly those responsible for the delivery of places and infrastructure within our future cities, as it will provide a means of evaluating the competitive advantage of proposed projects and programs.

We know that future retail precincts will not only look different but will also behave differently.

While the twentieth century was focused on what we now understand to be “traditional economics” and traditional land use planning, the future city will be founded on a “network economy” – either through physical clustering or virtual connections.

Measuring the benefit of cluster networking – be it the true values of physical or virtual infrastructure – will enable governments, investors, designers, planners and the community to make informed decisions on investment scenarios, facilitating smart decision making.

The Business School at the University of Technology Sydney has undertaken projects that aim to understand this new network economy, by looking at the urban tourism and urban tourist precincts, through data collection and analysis.

An example of this was their recent Tag-and-Release project in downtown Sydney, where they literally ‘tagged and released’ tourists to better understand their mobility.

Put simply, they collected data from tourists movements via a GPS device that tourists elected to wear for the period of one day.

The findings for the City of Sydney were that the majority of tourists march up and down George Street (prior to its closure for the construction of the light rail) from Town Hall to Circular Quay, with some movement on Pitt Street Mall.

Interestingly, they don’t venture further than that in the downtown area, be it because of signage, activation or tourist maps.

And once they get to Circular Quay, they board a ferry to Manly or Taronga Zoo, then come straight back again.

From a retail design perspective, the data recorded for Taronga Zoo during this study is extremely translatable, as it showed that recently developed areas of the zoo received less than adequate visitation.

But how do you use this information to better plan your retail spaces?

Once presented to the zoo authorities, the information collected led to the activation of a wayfinding strategy to improve flows to the new areas.

The same approach can be applied to understanding retail areas, be they traditional retail environments or those that are in town centre locations.

We often sense that areas are less patronised than others, but calculations of that phenomenon have not been available in the past.

The Connectivity Measuring Toolkit can put an evidence-based value on this physical situation and augment already established and sophisticated sales data for analysis.

The benefit of this is the ability to quantify and qualify to boards, investors, and development partners where expenditure should occur to elevate the productivity and activation of the retail space.

The possibilities of the Connectivity Measuring Toolkit are far greater than pure measurement. The research can provide a foundation for unlocking untapped benefits for visitors, owners, businesses and trade. It can simplify planning decisions by providing a common platform for examining and assessing projects for developers and governments alike.

By extension, it can bring developers and governments together to provide a common ground for mutually agreeable outcomes to be tested, discussed and refined, and can merge essential economic imperatives with physical outcomes, demonstrating a relationship between good economics and good design.

Better connecting retail assets, be it virtually or physically, with the contemporary city is essential to the sustainability of these assets.

This integration is essential in order to positively contribute to the connectivity of our urban retail places as vibrant destinations and will support the transition away from sterile, mono-use locations of the mid-twentieth century.

It is evident this is a cross-industry initiative that benefits all aspects of city making, of which good retail design can be a catalyst.

Click here for more information about the CityLife project. 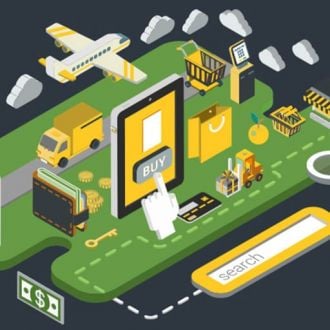