Last week Copenhagen-based architects Henning Larsen revealed the designs for its unique maritime-inspired pavilion, which will be a feature on Ipanema Beach during the 2016 Rio Olympic Games.

As reported in Dezeen Magazine, The Heart of Denmark Pavilion by the Danish architects will be situated near one of the most affluent suburbs of Rio de Janeiro and will host sporting, music and culinary events during the 2016 Olympic Games.

“The space will host a bar, press room and an exhibition on sustainable cities, as well as an amphitheatre where visitors can take in views of the Atlantic Ocean or watch Olympics fixtures on a big screen,” the article reports.

“The city’s iconic statue of Christ the Redeemer on Corcovado Mountain will also be visible in the background.”

The 300m2 tent-like aluminium structure will be divided into four sections, which will each be connected through clear acrylic.

But what is the thinking behind this unique pavilion? And why Denmark?

Firstly, diplomatic relations between the two nations go back to 1828 when a treaty of commerce and navigation was signed, leading a number of Scandinavians to move to Brazil in the late 19th century for economic liberation.

As a result, Brazil is now home to the largest Scandinavian population of any Latin American country.

In a statement from Henning Larsen, The Heart of Denmark Pavilion was designed to reflect this historical connection between the two countries.

“The pavilion’s simple and light expression is a reference to Nordic architecture and to Denmark’s maritime and sailing history,” the Henning Larsen website states.

“The lighting will be in the colours of the Danish or Brazilian flag, but because it is flexible, it can also be in the Olympic colours or be customized for particular events in the pavilion.”

Building on the success of a similar project at the 2012 London Olympics, The Heart of Denmark Pavilion project has also been established with business and tourism development in mind.

As reported in Denmark’s CPH Post Online the Danish Business and Growth Minister, Troels Lund Poulsen, said that the pavilion aims to put Denmark “on the map” during the 2016 Olympic Games in Rio.

“It’s completely unique and very ambitious that Denmark is the only country given the opportunity by the Brazilian authorities to set up a marketing platform in the middle of Ipanema beach,” Mr Poulsen said.

“The Danish pavilion will function as an exhibition window for Denmark, Danish companies and products during the entire Olympics. It will also be a point of congregation for Danish athletes, representatives and fans.”

But perhaps the aluminium structure of the pavilion – which will be constructed by the aptly named Danish producer of sailboat masts, John Mast, and covered in a white sail – is another clue.

In 2013, the year the first designs for the Brazil 2016 Olympic Games Village were released, Denmark signed a ‘Cooperation Agreement’ with Brazil to strengthen support between the two nations in the field of maritime training and education.

According to World Maritime News, Brazil has recently become an important market for Danish shipping, and as Denmark remains one of the world’s leading maritime nations, the agreement aims to forge an even stronger relationship.

In particular, the cooperation agreement hopes to contribute to Denmark’s ability to attract more skilled international students and employees to its maritime workforce.

Director General of the Danish Maritime Authority, Andreas Nordseth, said that the agreement would reinforce cooperation between Denmark and Brazil.

“We have much to learn from each other and I am convinced that the agreement will be of benefit to the students and the maritime cluster in both countries. 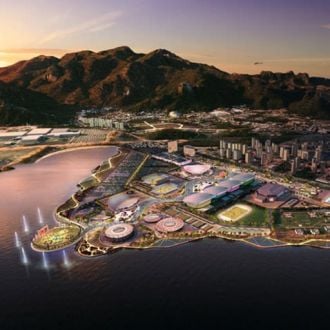