The grey zone between home and institution

It’s one of modern society’s greatest achievements, but also one of its greatest burdens. Advances in technology and preventative healthcare mean many retirees enjoy longevity that would have been unimaginable in the past.

Among the challenges this presents for governments is the question of where people will live as they age. Australia’s policy of “ageing in place” (at home rather than in aged care) is yet to be reflected in the nation’s built environment and its housing stock: options for those who find their family home too difficult to manage, but don’t need or want the level of care in a retirement village, are still lacking.

Just one bad sprain or back injury and the young and able get a taste of just how fundamentally unwelcoming many homes are to the elderly. They have stairs up to the front door. They have no downstairs bathroom. There are no railings, and the walls of the stairs or bathroom aren’t solid enough to install them.

There is a growing body of resources for those who want to design homes to suit all ages. Livable Housing Australia, a not-for-profit partnership between community groups, government and industry, provides an accreditation system that gives guidelines on how to build houses and apartments that can be adapted to people at all stages of their lives.

But supply is not keeping up with demand.

There are around 1000 homes that are now LHA-accredited and an unquantified number of designers and builders incorporating liveable housing design features into residential buildings.

“The community is upgrading slowly, but not to the level and extent needed for older people to be more independent,” says Amelia Starr, the principle of aged care and disability consultancy Brindabella Group and former executive director of Livable Housing Australia.

Surprisingly, the ageing no long has federal representation.

Starr says: “In Australia, we’ve had very strong ageing agendas in the past, but, federally, we don’t have any leadership in the seniors’ space. We have no minister for ageing anymore and no national strategy for ageing.”

The LHA guidelines include making homes easier to enter and navigate, free of fall hazards, and easy and cost-effective to adapt, such as by having reinforced walls in certain areas for the installation of handrails.

“I’ve said to the development industry that 50-to-70-year-olds are largely untapped as a market,” Starr says. “We just don’t sell housing to that market.”

Having a step-free entry is being picked up by young families because younger mothers see they don’t have to lift up the stroller. Kids under six are vulnerable to tripping hazards just like the elderly, Starr adds.

Nick Proud, current director of LHA, says in the roughly seven months since the LHA accreditation website portal went live, there have been at least 2500 visits to the website each month.

Proud says there have been some calls for this kind of design to be mandated, for example by requiring a certain percentage of new developments to contain this type of housing.

They’re also much cheaper to install at the building stage, as opposed to retrofitting. And they’re potentially a boon to a property’s value, tapping into a swelling, moneyed market as the baby boomers age.

But Proud is worried that measures like mandates could harm the housing industry, particularly when the market isn’t hot and margins are tighter. He believes incentives and good guidelines are the answer.

Starr has also been reluctant to call for more regulation that could potentially stifle industry innovation, but now she believes there may be room for a limited level of regulation.

“I don’t think the housing market is changing over quickly enough,” Starr says.

Urban design for the ageing, too

The surrounding built environment is equally slow to respond to the needs of the aged. Starr says one of the fastest-growing demographics is the rise of older people being primary carers for young children while the parents are at work. So public spaces should respond to this dual use.

“Older people don’t just need to be independent, they are wanting to participate, to contribute and be part of the economy,” Starr says. “I look at a lot of public domain spaces they’re very beautiful, not very accessible.”

Good design responses are playing a greater role in building aged care facilities, but these innovations have been slow to seep out into the public domain.

Warren Kerr, national director at Hames Sharley, says aged care and healthcare were once similar architectural disciplines, but they have diverged into entirely separate specialities as designers have tried to take away the “institutional” feel from aged care facilities.

Long, straight hallways, for example, have been replaced with some visual variety, so each room entrance is slightly different, making it easier for dementia patients to recognise their own rooms.

Architects are using “architectural sign language”. If a room’s door is glazed, it invites you in as a common room, while service doors are flush with the wall.

But Kerr, too, feels aged care needs to be better integrated into the community, rather than viewed in a vacuum.

Despite the excellent research, improving design skills and increasing demand for the needs and desires of elders to be integrated into everyday homes and community spaces, the pace of change is slow and fragmented.

“Just as we have places for children in the community, we need to have places for the elderly as well,” Kerr says. “They need stimulation and interaction. Keeping them in specialised institutions are treating them like we used to treat mental health patients many years ago.” 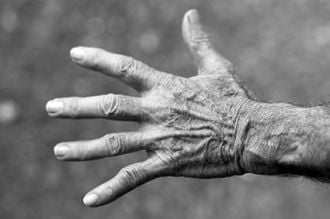