Australia gets a serve of honest Brûlé

When the man behind Monocle – the global magazine that defines style, urbanism and aspiration across borders – passes judgement on your city, you had better be paying attention.

Recently in Australia, Tyler Brûlé is a rarity as the founder of a thriving independent print publication in the digital age. More recently, he parlayed his extensive knowledge of style, design and the sartorial best from his extensive travels into a branding and design agency, Winkreative.

Monocle recently named Tokyo as the world’s most liveable city, knocking Sydney and Melbourne down the list.

Australia represents Monocle’s third-largest international readership and Brûlé has spent quite a bit of time here in the past two years as Winkreative develops a brand blueprint for Brisbane Airport.

As a keynote speaker at Sydney’s recent Vivid Festival and a guest on a Lend Lease panel on urban renewal, Brûlé shared his insights and raised some controversy. The panel discussion – World-class urban transformation: Reshaping Sydney on a global scale’ – inspired Brûlé to critique a trend towards overzealous regulation that he says is threatening the vibrancy of Australia’s cities.

Brûlé said Sydney’s CBD “bar lockout” rules – which ban patrons from entering bars after 1.30am – were in danger of making daily life a bit too joyless and complex. The rules came in following the deaths of Daniel Christie and Thomas Kelly, who were fatally punched during alcohol-fuelled brawls in Sydney’s Kings Cross.

“Australia is gaining a global reputation for being rather health and safety whacked out,” he told Vivid participants.

Less controversially, Brûlé warned that the trend of moving noisy businesses to the outskirts was counterintuitive to the function of a city. “What’s wrong with noise? You live in a city; noise is part of the excitement,” he said.

Great cities, Brûlé said, are about vibrancy, diversity and friction. And with that there is noise. “A place of silence is not what cities are about. If you want to have silence, Australia has lots of places you can go.”

“Good cities should be light on rules and regulations for street life. Global cities need to function 24 hours a day,” he urged.

Brûlé believes the core issue is “quality of life”. Being over- or under-governed affects the way we live, and influences how future generations will function in our cities.

City planners could look to Lisbon and Vienna to spend the $13 billion slated for infrastructure and buildings for Sydney. For example, architecturally-interesting kiosks there are successfully creating activity hubs through those cities by allowing small businesses to start up and thrive on the streets. These cities also allow people to turn rooftops into viable green gardens.

Patricia Forsythe, Sydney Business Chamber executive director and fellow panellist, agreed with Brûlé’s criticisms. “Here we are in the city of ideas and so often we get caught with red tape,” she said.

A champion of the kiosk concept, Forsythe said she’d watched a café owner go through an agony of long bureaucratic delays, and she feared what more rules and regulations would do.

Brûlé also urged Sydney’s urban planners to design with the essence of the city and environment at the heart of the execution rather than relying on “starchitects” known for bland and internationally-acceptable dwellings.

A bouquet or two from Brûlé, with tips

Brûlé said Sydney consistently featured in Monocle because of its quality of life.

He said there were some “extraordinary projects coming on stream” including the significant urban renewal projects of Darling Harbour, Green Square, the Bays Precinct, the Central to Eveleigh corridor and the development of light rail in George Street.

Along with function, the ideas of form and atmosphere needed to be considered, Brûlé warned. For example what happens on George Street when the trams stop running at midnight?

“It’s wonderful to look at how things have worked in other parts of the world,” Brûlé said, “But how do you build on that?”

In case Australian urbanists need a brief on what to aim for, Brûlé revealed that the Monocle crew has a penchant for cities that: 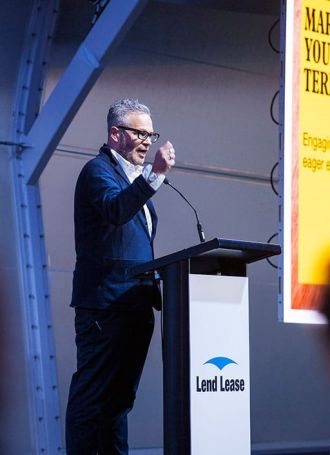