While some parts of the scientific community are looking at using cultured meat to solve a potential world food crisis (read our story on the topic here), others have decided that the way to ensure the world has all the protein it needs is by cutting out the middle… er, animal.

Ethan Brown of Beyond Meat in Los Angeles is working on the basis that meat from cattle is essentially a protein that the cows create from eating plant matter. His solution to creating additional, livestock-free protein, is therefore simple: replace the cow with technology.

“Why would you run plant matter through an animal to create meat when you could actually get the constituent parts from a plant and create [it]?” he told The Economist in 2016. Funded by, amongst others, Bill Gates, Brown has been working on his process for some time and is already selling ‘plant meat’ through the fourth-largest food corporation in the US.

His staff includes everyone from molecular biologists to chemists whose job is solely to replicate the flavour and aroma of the real thing. “We have to understand meat like Jimi Hendrix understood his guitar,” he said in the same interview. At the time, however, there were still some wrinkles to iron out in the final product, including convincingly duplicating the texture and fatty feel of meat in his essentially vegetable product. But Brown is in no rush, so long as she gets it right. “This is something that will disrupt the way got protein for the last two million years,” he said, “and that’s a long process.” 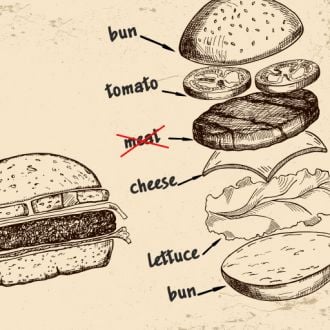