As a core part of the planning and design process at Hames Sharley, we endeavour to deliver transparent and flexible methods of engagement. In his recent article The Changing Landscape of Stakeholder Engagement, Naden Scarfone explains not only how we go about this but more importantly why we undertake the consultation process.

To help focus you on a successful implementation of the strategy, we’ve made a quirky checklist of seven deadly sins that should be avoided at all costs…

The vain man is like a painter who continually draws but his own picture.

It’s very easy to slip into the trap of taking on board the opinions of those who speak the loudest. Don’t disregard the opinions of a group’s more softly spoken members just because the vain alphas are constantly clamouring for attention.

Lust, forgetful of future suffering, hurries us along the forbidden path.

Designers and planners are, by definition, creative souls, and with creativity often comes a vision for how a project may evolve. However, it’s a cardinal sin to tailor workshops or surveys to garner responses and outcomes that suit their subjective opinions. Questions must be carefully considered so as not to lead respondents down a particular path of bias.

Greed is merely a species of nearsightedness.

In a similar vein to vanity, greed can sometimes be displayed by members of stakeholder groups. If a particular avenue of discussion is a priority for someone, the meeting coordinator mustn’t allow that individual to hijack the agenda for their own self-interests.

While seeking revenge, dig two graves – one for yourself.

Don’t disengage with a particular group or individual based on past prejudices or negative experiences. Excluding opinions because someone has proven to be ‘difficult’ in the past should be avoided because wrath is a two-way street – you can be sure it will create greater issues further into the project.

Envy comes from people’s ignorance of, or lack of belief in, their own gifts.

Occasionally groups become overly focused on wanting an outcome because it has been seen to have worked well elsewhere. While inspiration and precedent are valuable assets for a group, each individual project should be addressed within its own context and boundaries.

Laziness. Unwarranted repose of manner in a person of low degree.

As the old saying goes, “If a job’s worth doing…” Ensure you have done your due diligence in all aspects of setting up your engagement strategy: invite the correct people, conduct events in a clear and concise manner; and above all create and follow through a plan that promotes equity and transparency.

It was pride that changed angels into devils; it is humility that makes men as angels.

We all bring preconceived ideas to the table when gathering to discuss or plan any project. It’s human nature to grasp an idea and then get excited by the prospects that it allows – especially in designers and planners who are driven by a passion to create. But when the wider group isn’t fully onboard with the concept, one mustn’t arrogantly pursue one’s personal direction to the disapproval of the wider group. 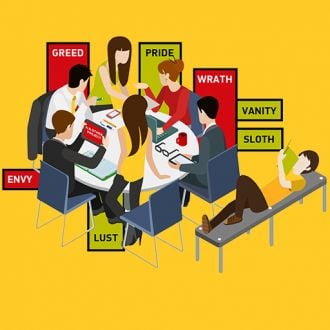