The shopping centre of 2100

The concept of shopping centres as we know them began in the late 1700s with Paris’ Tapis Rouge created in 1784, followed by a number of other Parisian stores, including Au Bon Marché, founded in 1838, which is still a thriving department store today. Westminster Arcade was the first enclosed shopping centre in the U.S., built in 1828 in Providence, Rhode Island, while the UK’s famous Sainsbury’s begun selling dairy products on Drury lane in 1869. As time went on and consumerism rose to the fore, by the early 1900s there were numerous shopping centres in prominent cities around the world, where upper and middle-class customers would enjoy mingling and shopping as a leisure activity. Shopping centres continued to transform, and by the 1950s evolved into the more modern day ‘suburban malls’ we see today.

But even before we called them shopping centres, arcades, galleries, open air piazzas and even village markets have played a crucial role in our societies for hundreds, if not thousands of years. In fact, the Roman Emperor Trajan commissioned Greek engineer and architect Apollodorus of Damascus to build “Trajan’s Market” in the 2nd Century AD – a central location that consisted of shops selling fruits and vegetables, fish, spices, oils and wine; which was also filled with restaurants, a library, performance halls and administration offices.

No matter the format, there has always been central place for people to buy (or barter for) what they needed. And beyond consumerism, these commercial centres have also been a place to for people gather and socialise. Despite their changing appearance, the social element of the shopping centre has remained the same throughout the ages.

If we can trace the idea of a shopping centre as far back as the Roman Empire then it’s safe to imagine shopping centres will continue to exist in 2100. But what they might look like, that’s another question entirely.

As the climate changes and the population grows, the effects of these will no doubt shape the shopping centres of the future. That, and the rapid advancement of technology, will likely result in the shopping centre of 2100 looking almost unrecognisable; although the fundamentals of exchange will remain at its core.

There are a few ways to imagine what our world may look like 80 years from now – most of them rather bleak. It’s likely that the effects of global warming may leave parts of the planet uninhabitable by 2100; perhaps there’ll be desert in some parts, ice and snow in others.

However, in places where humans continue to reside, they will be immersed in nature because there’s so little of it left. Architects will have embraced sustainable and biophilic design to a point where shopping centres are essentially the parklands of the future. Running completely off the grid, I see shopping centres powered entirely by renewables, food grown and harvested directly from the centre because food is in short supply, and every aspect of the design will be developed with the utmost care of the environment in mind.

Retail outlets will boast locally sourced products as products with far-reaching logistical footprints will be absolute premium price-points due to their negative carbon footprint. Restaurants will use food grown on site and every aspect of the centre will be localised, community focused, and sustainable. Boasting natural, biophilic designs, the shopping centre of 2100 will become a haven for families to come together, enjoy nature, buy locally grown food grown and support local businesses.

Due to the localisation of shopping centres, it will also give each centre a unique feel. Over the next 80 years we can expect continued population growth, a further rise in densification around cities, and increased multiculturalism. All of which will lend itself to shopping centres that are richly diverse, each reflecting the specific tastes, produce and restaurants of the surrounding locals. Homogenous shopping centres that look the same in all cities around the world will become a thing of the past, transforming to instead become more like local villages prior to globalisation.

We won’t however, be revisiting medieval times. While the shopping centre of 2100 will be in closer harmony with nature and locally focused, it’s also likely to be very high tech. By 2100 we’ll (hopefully!) have said goodbye to cars, petrol, tyres and everything fossil fuel related. Instead, I envisage an eco-friendly drone service – perhaps an Uber Drone – to get from A to B. We’ll be living in close compact quarters – partly due to space restrictions, partly due to property prices – and the sky will be filled with flying vehicles that run on clean energy.

Of course, we could picture a completely Black Mirror style sci-fi world where bionics are par for the course. Where microchips implanted in our skulls would allow us to virtually view our social feeds, or that electronic chips in our eyes would allow us to pay for goods with a simple retina scan. But I’m not convinced that’s the way forward.

What I do think we’ll see, however, is a significant advancement of emotionally intelligent technology. Already, advertisers are testing billboards that can read the expressions of passers-by to gauge their reaction to an ad. Facebook can already recognise your facial features well enough that it knows who you are in your friends’ photos.

By 2100 it’s more than likely intelligent technology will be able to recognise you wherever you go. Shopping centre billboards will feature bespoke ads that are served to consumers based on their individual tastes, with any ads that fails to pique a consumers’ interest disappearing as fast as the next one rolls around. Special offers and gifts will be highly targeted by an artificial intelligence that will understand your likes and wants better than your significant other.

But how will you pay?

In the past few years alone we’ve seen cash fall by the wayside to make way for credit cards, payWave, and now NFC-enabled smartphones. By 2100, the technological capabilities to enable a plethora of payment options for customers will be limitless. But the real question is, what will be the currency?

What will be the real value of goods in a world post-climate change? Clean air? Food? Free time? Will we simply have a bank account with Bitcoin style ‘credits’ that can be used as currency? Or will we need to give back to society in order to earn the right to consume? Perhaps we’ll need to volunteer time in the shopping centre’s community garden before we’re able to shop. Perhaps the circular economy becomes so intrinsic to future economics that simply recycling goods will earn you spending dollars. The reality is impossible to predict.

A place to gather and socialise

The truth is, what the shopping centre of 2100 looks like is anyone’s guess. The world is changing so rapidly it’s difficult to predict 20-30 years ahead, let alone 80. But one thing we can assume will never change is our core human values. If we look at Maslow’s Hierarchy of Needs, assuming that in the year 2100 our basic physiological and safety needs are met, there will always be the need for love and belonging; a sense of connection with friends and family.

At its core, this is what shopping centres have always been… and always will be. Whether the local village market, the ancient piazza, the suburban mall or the futuristic centres of 2100. Shopping centres are a place to consume, yes. But they’re also a place to be entertained, to dine with friends, to explore, to unwind. So as long as human connectivity is at the core of their design, shopping centres – no matter how much their physical design must change and adapt – will always have a part to play in our society. 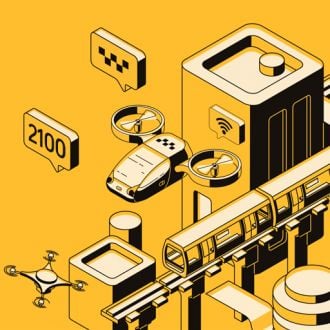