In our article It’s a shore thing, we looked at some of the ways in which a designer should approach projects at the water’s edge. As a natural progression from that piece, this month we investigate the projects that are surely among the greatest architectural symbols of Australian society: surf life-saving clubs.

If nations were to be identified by a particular type of building, there would be few countries for which the choice would be obvious. Perhaps England would be represented by intimate, wood-lined country pubs. Maybe the United Arab Emirates or its oil-rich neighbours could be identified by gleaming, modern skyscrapers, and there’s an argument that whitewashed Cycladic homes are what first spring to mind when we think of Greece.

But what type of building would immediately jump out as Australian? Our history of built settlements is too short for anything to have ingrained itself into the global psyche for the long term. For the answer, we need to look to what has come to be seen as uniquely, true blue Aussie – and there can be few structures that fulfil the criteria like the surf life-saving club (SLSC).

Here at Hames Sharley, we have recently undertaken a number of surf-club projects throughout the country, and with each commission has come a sense of pride. No other nation in the world is home to such a large number of buildings that not only house what is effectively a vital emergency service but also act as central hubs for the communities that surround them.

The facts and figures

Today there are more than 300 surf clubs throughout Australia, with a combined membership of around 170,000 people. The huge majority of these members are non-paid, meaning the clubs represent the largest volunteer movement of its kind anywhere in the world. Indeed, the existence of SLSCs is made possible by community donations, fundraising, corporate sponsorship and government grants.

Australia’s relationship with SLSCs began properly in 1907 when representatives from small separate Sydney clubs met to form the Surf Bathing Association of New South Wales (now known as Surf Life Saving Australia). Fast forward to today and the organisation monitors the country’s 36,000km of coastline, covering 12,000 beaches, which will see an expected 100 million visitors this year alone. Over the past hundred years, surf lifesavers have rescued approximately 630,000 people from our oceans.

Community hubs and promoters of health

Beyond the obviously essential work of saving lives, surf clubs represent the true spirit of Australia. Whether it’s offering beachside facilities such as showers or boat ramps (often installed and maintained by the clubs) or providing meeting places such as bars and cafes for those who don’t want to get their toes wet, they have become hubs for the local community.

Australia identifies itself as an outdoors nation, with an emphasis on healthy activities, and over the decades we have produced countless world champions in Iron Man and surf life-saving competitions. It is at SLSCs around the nation that these competitors develop and hone their skills, and for every champion, we produce through the clubs there are numerous youngsters training alongside them. While they may not go on to pick up medals, these children are still inspired to lead more active, healthier lives.

In April this year, Scarborough Beach in Western Australia will host the Australian Surf Life Saving Championships. We at Hames Sharley were delighted to be associated with the event in some small way, having designed the Scarboro SLSC facilities, which are due for completion prior to the championships taking place.

More than that, we are proud to be part of a nation where the true spirit of the people can be so closely identified with a building type as special as the Surf Life Saving Club. 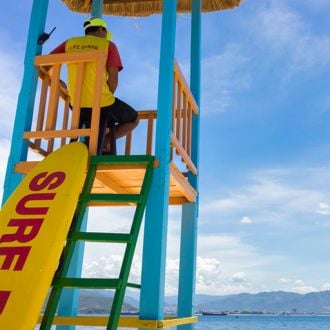