The impact of a driverless society on retail

It’s coming at us faster than a speeding Bugatti Veyron – the era of the autonomous car. In both the US and Europe, research and development are reaching mammoth levels, with some tests running to millions of miles of real-time road testing, and connected networking and crowd-sourcing is certainly going to help power the intelligence of the cars of the future. So, with all of this test data, analysis and experience being racked up, surely the arrival of the first driverless car is closer than we think…

Before that day arrives, however, there remain unresolved issues that must be addressed. Society must first undertake a significant behavioural shift before it can truly embrace driverless vehicles – and that may take some time. Simply trusting in vehicles that have no human interface is too much of a leap for the general populace, and the progression to truly driverless roads will be slow in the early stages. Initially, we will still be required to get behind the wheel, if only to take over when the onboard computer needs to drop out of ‘auto-pilot’ mode. However, after a generation or two, and with further advancements, we may be hopping into cabs that have neither steering wheel nor driver’s seat.

When this technology finally arrives the impact to retail will be immense. The car will truly become a slave to our disposable needs. We will effectively be chauffeured to our desired destination, to hop out at the front door or mall entry and walk away, knowing that we don’t have to deal with finding that elusive parking bay (or trying to remember where we left the car when the time comes to return to it). Perhaps on the trip in, a digital hook-up to retailers will preview some of the bargains you can expect to pick up on arrival. Ideally, the car will then be able to park itself somewhere remote from the drop-off – and hopefully where it can plug in for recharging (Tesla is currently working on wireless charging bays for its cars). While you are busy getting your last few items or are waiting at the final checkout, you can notify your car to be ready, and it will automatically swing by to pick you up at the front door, much like an Uber. It’s valet parking without the valet.

While the world marks time for the introduction of the driverless car, meanwhile, society is already displaying the changes that are, perhaps on a subconscious level, paving the way for them to pull up in our garages. Current trends show a decline in new driving licences being issued to young people growing up or living in first-world cities that are rich in public transport infrastructure; places like Tokyo, for example, although the trend is showing up in some US and European cities too. It’s a development that suggests car ownership could become obsolete for this particular demographic, especially when you note the decline in an emotional attachment to car ownership in sub-thirty-year-olds generally. Added to this is the rise in car-sharing, quite popular with inner-city dwellers who don’t want the burden of ownership, but still have the need to drive themselves around.

All these factors contribute to a falling away in the desire for personal ownership, which may just mean that the driverless car could become a shared resource for the general city patron, rather than the future’s personal vehicle of choice. Think the shared-bicycle schemes of cities like London or Copenhagen, but with engines and greater capacity to carry shopping…

As far as the impact on retail is concerned, we’re already experiencing the downgrading of the need to drive home with a boot full of shopping. Home delivery, concierge delivery, drone delivery and other store-to-door customer-convenience initiatives are becoming commonplace around the world (although there is a limit to how much shopping a drone can carry and still be able to lift itself off the ground…). But the idea of a shared autonomous resource is also quite interesting in that it may mean cars spend more time driving than being parked – and that could lead to a reduced need to provide parking spaces for shoppers. Sure, retail will need to respect the requirements of those who travel from country homes, and the odd patron who will drive themselves to the centre, but potentially, car-parking structures may be significantly downsized. That, in turn, could lead to retail centres finally being built up to the site edge in an all-engaging manner that puts customers first and cars second.

So, ready or not, the driverless car is coming. The big question is whether retailers and customers are prepared to go along for the ride. 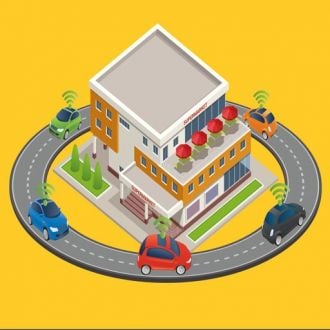