What will our universities look like in 10 years’ time?

Australians today change careers more than once in their working lives and there is a growing trend for continuing personal development, education and research.

For our universities, this is good news; one degree and, at most, a post-graduate qualification is no longer the limit.

In future, we may be allowed to access our superannuation to retrain, according to recent comments by the Treasurer, Joe Hockey, opening up a new way to fund a second or third degree.

On the other hand, university education has gone global. Two big influences are free online courses known as MOOCs (massive open online courses) and the flow of students to the most attractive campuses worldwide. Universities are revisiting their business models, their marketing methods, their mix of international and local students and their buildings and campuses.

The fear that campuses will become like ghost towns, with courses shifting to online delivery, have proven largely unfounded. Some teaching formats, such as lectures, lend themselves to online delivery. But students still value tutorials and other opportunities to connect with each other, and their faculty teachers, face to face, says James Edwards, a director at Hames Sharley. “We work with many of Australia’s 43 universities, and we know that several have ambitious capital investment programs underway. The University of Sydney, for example, is investing $2.5 billion in a major campus redevelopment.”

More students on campus – not fewer

Just as shopping centres and main-street retailers have fought back against the rise of online shopping, universities are looking at ways to make their campuses more attractive and relevant. “There is a strong focus currently on improving the student experience,” Edwards says.

Bringing student housing back on campus is an important trend. Curtin University in Perth plans to construct accommodation for 1,500 students on its Bentley campus over the next five years, and grow student and staff numbers on campus from 47,000 to 60,000.
The accounting firm, Ernst and Young, posited the idea that “a thousand-year-old industry [is] on the cusp of profound change” in its 2012 report, University of the Future.

“Over the next 10-15 years, the current public university model in Australia will prove unviable in all but a few cases,” the report’s authors wrote.

Peter Rohan, EY partner and co-author of the University of the Future report, says three elements are impacting. The first is that student numbers are not growing as fast as they have in recent decades. The second is that “blended learning” – a mix of online and on-campus study – will continue to have an impact on whether students are on or off campus. The third factor is the growth in the number of international students, currently about 25% and above at most major campuses.

However, Edwards does not believe that the next 10 years will see dramatic change across the sector as a whole and warns against generalisations. “Universities tend to be grouped together, but they have quite different characteristics. Some are regional or have dispersed campuses, some are well established, some are specialised and others are relative newcomers.”

The issues of deregulating fees and funding tertiary education and research still have to be debated and addressed by government. Judging from the recent failure to get legislation passed this process has some way to go.

Universities recognise that their asset base and administration will need to be significantly leaner than it is today, Rohan’s report suggests. Edwards agrees, however, there is a strong push to invest in modern facilities, at least in the large city-based universities.

Both experts agree that universities will be open all year round (not just the current 24 weeks) – a factor that will fundamentally change the possibilities for the built environment.
Parents are important stakeholders in the future of our universities and heavily involved in choosing the university and courses for their children, Edwards says. “Many will look for characteristics such as a collegiate environment, security and safety, and the quality of the student experience.”

Australian Universities have been successful in providing safe, tolerant, liberal and inclusive environments that are popular with both local and international students.

Design will increasingly focus on these intangibles, Edwards believes, such as the sense of community influenced by the design of buildings and the public spaces between them; safety and security resulting from more students living on campus, activating it day and night; and a mix of residents including international students, locals and academic staff.

As campus populations grow, they will support more retail and commercial activity. Already supermarkets and restaurants are opening on university campuses.

Libraries will challenge the rec centre and student union as the hubs of university life (and are already doing so). “They are almost unrecognisable,” Edwards says. “UNSW has done away with the traditional front loans desk at its library and created a Help Zone where librarians roam and interact directly with customers. The University of South Australia’s new student learning centre turns the traditional idea of a library on its head. Students are encouraged to hang out there all night in a variety of spaces: quiet, flexible, multi-tiered spaces with beanbags, technology enrichment, lots of meeting rooms where people get together and collaborate.”

Academic spaces will be different too. Influenced by commercial workplace design trends which encourage collaboration and interaction, there’s a move towards more open and flexible workplaces to accommodate academic staff and the growing numbers of sessional staff. However, it is important to understand the requirements of high-quality teaching and research. “There are a lot of merits in the academic tradition where tutors are able to work with small groups of students in their own workplace, and there needs to be a balance between commercial workplace design and the needs of the academic environment,” Edwards says.

But the boundaries between academic disciplines and faculties are blurring. Buildings are designed to reflect and encourage more cross-disciplinary exchange. The approach to research is also changing, with the need to collaborate and share expensive equipment.

Rohan believes big lecture halls will be among the first of the traditional spaces to disappear. “Students are working part-time and cannot always attend, and can now listen to podcasts of lectures,” he says. He is seeing a greater emphasis on the small-scale tutorial. “Students want to physically meet. They can’t survive socially in the ‘nethersphere’. Even the fully online students need to come together periodically.”

Universities are seen by parents and students as a passport to a better career, Edwards says. Universities are putting increasing focus on helping local students to transition to work, and giving international students the opportunity to experience Australian workplaces. Such opportunities emerge when students are part of the on-campus population. What is changing is the universities’ focus on making that experience an exciting one.

Snapshot – The future of our universities

James has a passion for design and a deep knowledge of the tertiary and research project sectors. He has been responsible for the award-winning Biomedical Research Facility for the University of Western Australia and two new facilities for the Harry Perkins Institute of Medical Research, one on the QEII Medical Centre campus and the second on the site of the new Fiona Stanley Hospital. 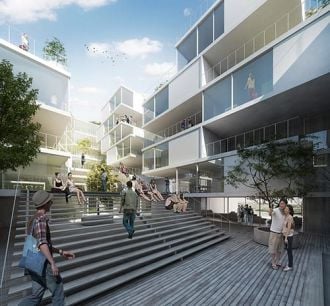