Build it and they will come…

Perhaps it’s the price of beer that makes Berlin the most affordable city in the world for 25-30 something millennials – or that a one-bedroom apartment in Berlin’s city centre costs just a third of a musty bedsitter in suburban London.

For jobs you need to go west – New York and San Francisco have the highest employment opportunities in the world for millennials – and for culture Lisbon and Montreal are hot.

But according to a recent Guardian article, The world’s best cities for millennials, if its education you are after, then Australia is the place.

Not one but four Australian cities – Adelaide, Brisbane, Melbourne and Sydney – are listed among the world’s top 30 destinations for higher education, particularly for UK students, who can pay up to £27,000 (AU $51,000) for an average three-year undergraduate degree.

Citing the QS Best Student Cities list, Melbourne comes in as number two behind Paris in the ‘Student Mix’ category, while Sydney is listed as number four. Brisbane sits ahead of New York at number 18, while Adelaide sits just above Amsterdam in position 26.

The ‘Student Mix’ category looks at the overall “student make-up” of a city and is based on four key factors: student population, international volume, international ratio and tolerance and inclusion.

This is good news for Australia’s education export sector that generates more than $18 billion a year from student fees, services and lifestyle and tourism spending.

But what role does Australia’s educational infrastructure have in not just attracting, but sustaining this golden goose?

Melanie Tannin, in her recent article The Adelaide Experiment points to the University of Adelaide’s Braggs Building (designed by Hames Sharley) as an example of a “destination building” for international scientists.

So if you construct a world leading building, design it specifically for world-leading science and open its doors to world-leading researchers, will they come?

According to Hames Sharley founder and Executive Chairman, William Hames, the answer is yes.

Reflecting on a project Hames Sharley was commissioned to undertake for the University of Western Australia back in 2006, Bill said that he advised the university to think big when designing its new research animal facilities.

“The project was for two small animal facilities for the University’s Biomedical Research Department. However, understanding how important it is for universities to attract grants and the best researchers, we challenged the client brief,” he said.

“Instead of two small buildings, we suggested they build one large facility designed to international accreditation standards, plus two small experimental facilities.

“At the opening of the new Biomedical Research Facility the Vice Chancellor took me aside, shook my hand, and said, “Bill you’ve given me a problem, this building is fully occupied with research grants for the next ten years, we’ll need to build another facility to keep up with the demand.”

The Flinders University Northern Territory Medical Programme Building, which won the AIA NT Award for Best Education Architecture in 2015, was constructed as the final piece of the puzzle for the Northern Territory’s medical education program.

Following the completion of this building, Flinders University medical students are now able to undergo their entire medical training in the Northern Territory.

A physical link between the university and hospital allows a more immersive and hands-on learning experience for medical students, while interactive learning spaces connect students with South Australian based lecturers.

With community, connectivity and culture high on the priority list for international students, it’s also important to reflect on how Australia’s university facilities interact with the cities they’re in, for the ultimate ‘student mix’.

The Urban Development Institute of Australia (UDIA) recently tabled the topic of connectivity for the development of future-ready Australian cities, with its CityLife Project.

Winner of the connectivity category, Hames Sharley Director and Portfolio Leader of Urban Development, Michelle Cramer, has proposed the creation of a Connectivity Measuring Toolkit that will simplify city planning decisions by providing a platform for examining and assessing the potential use of new infrastructure.

“The urban population explosion is leading to a number of well-documented issues for cities in Australia, the more common ones being potential future health problems, an affordability crisis, and difficulties in access,” Ms Cramer said.

“In future communities, competitive advantage will come from how places are connected, not just what they look like.”

This is important, as Sydney was ranked number one in the ‘Desirability’ category of the QS Best Student Cities report, a ranking that took into account the Economist’s most liveable cities index, the Globalisation and World Cities index (GaWC) score, as well as a safety, pollution, and corruption score.

So it’s time to start thinking about how we might best prepare for an influx of students into our already. 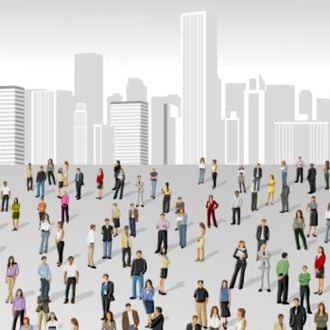