Cheng and Mai met when they were studying at Adelaide University in 2018 and subsequently decided to share their lives in Australia, gaining citizenship in 2023. Cheng is a product engineer working in advanced manufacturing at the Lionsgate Business Park and Mai is an electrical engineer working for Tesla at their Australian headquarters in Adelaide.

In the last 10 years, the Adelaide CBD has continued its transformation as a higher density living environment and mixed-use activity centre. In 2026 Adelaide was voted Best Small Global City with the judges praising the transformation of its economy while at the same time sustaining and enhancing its lifestyle value scores.

This year has seen the completion of the Middle Metro tram network which has helped facilitate population growth while managing congestion and sustaining Adelaide’s world-famous character values.

Cheng and Mai live in an apartment overlooking Victoria Square, the Central Market and Chinatown. “We love living in our city apartment, don’t we Mai?”, Cheng says to Mai.

“Yes, it reminds us a lot of living in our previous hometown of Xiangtan, except we didn’t have the lovely markets right below like we do here”, Mai replies. “I work right here in the city and Cheng catches the train to work so we don’t even own a car. We just order a Tesla self-drive when need travel into the country.” And Cheng adds, “For most of our trips though, we use the trams because you can go anywhere easily from the city”.

The city centre’s population has grown significantly over the past 10 years, up almost 65% from 2017, which is ahead of forecasts. Part of the reason is the transformed economy, but what is also evident is that the ‘new economy’ companies driving this change are setting up their headquarters in Adelaide.

CEO of VR based training company Digital Learning Inc., Wilson Parker, explains, “Here at Digital Learning we want to attract the best staff in the world. Many of our staff are former educators who are now driving our software development. They are at that point in their lives where they’re looking for educational choices for their kids. We chose Adelaide for our head office because it’s a great place to live and work, the cost of living is competitive, and it is part of our brand in attracting great staff!”, Wilson says enthusiastically. 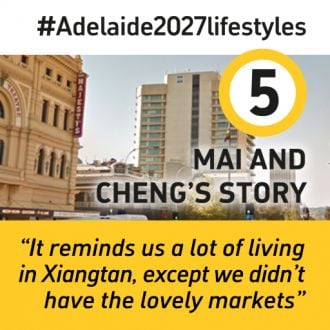