Bob remembers the Advertiser headlines when the new tram line through Norwood was being planned for The Parade back in 2020. At the time he was quite worried about the impact on his computer imaging and technology business situated on the tram alignment. As it turned out there was a bit of traffic disruption during construction but, once commuters got accustomed to their new travel routines, as they had done when the city tram was first extended back in 2010, things quickly settled down.

In fact, both Norwood and Bob’s business, have never looked back. He and his partner Peter also live in Norwood, which allows Bob to walk to work while Peter travels up The Parade to the hills, where he runs his winery.

“I set up my business as a sole practitioner in 2013, at a time when a number of 3D graphics, virtual reality (VR) and augmented reality firms were establishing in Norwood and gaining global recognition for their quality and creativity”, Bob explains. “I now have 15 staff and a client list that is mostly global in nature. We don’t try to compete with the massive graphics factories of Asia. We partner with artificial intelligence (AI) and hardware companies here and overseas to put smarts and flexibility into our products to create a point of difference and add value for our clients”, he said.

“We are also finding that our clients are wanting to come to Adelaide to do business and at the same time have a holiday”, Peter explains. “Bob and I have many times entertained our clients in the winery, which also has accommodation, and of course there are all the activities in mid-March to take in as well”, he says.

Being the first road in eastern Adelaide to get a new tram, The Parade has undergone quite a transition over the period. Norwood itself still has the tree-lined character streets that have made it such an attractive place to live, while along The Parade, where changes to the ‘main street’ planning policies were put in place to complement the tram extension, new mixed-use developments now line either side of the street.

“The Parade feels a lot more like Toorak Road in Melbourne these days. It has quite a cosmopolitan feel with more nightlife and more buzz”, Bob explains enthusiastically. “There are a lot more students on this side of town now because the tram takes them straight into the universities, and many developers have created affordable ‘build-to-rent’ accommodation close to Norwood central.

The changes along the Norwood Parade transit corridor have seen its population increase by about 25-30%. 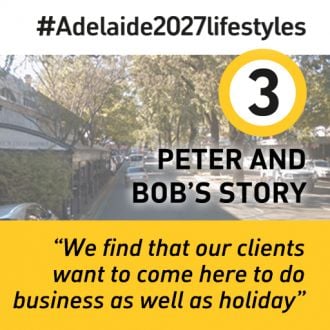