Simone and Pierre came to South Australia in 2019. Simone is a managing engineer in the submarine program and Pierre is a head chef working in the new hotel at the Riverbank precinct. Their migration from France was prompted by Simone’s company. Being a supplier to the new submarines, they were seeking to appoint a manager to head up their South Australian office and Simone jumped at the chance.

The couple fell in love with the character stone cottages of Adelaide’s inner suburbs and are now living in Prospect where Pierre trams to work and Simone takes a self-drive on the freeways to Port Adelaide. They are planning a family and their cottage is currently being upgraded in preparation for the baby’s arrival.

“Adelaide has been so welcoming to us and it has made the move from France so much easier”, Simone said. “Prospect is a wonderful urban village with all the things we need and love - shopping, restaurants, cinemas, cafes and there is even a French patisserie run by a friend of ours, Evette.”

Evette lives in a new apartment on Prospect Road above her patisserie. The building is one of several new apartments in Prospect in recent years, prompted by the introduction of the tram and the inner urban lifestyle generated by its arrival. The apartment developments have mainly been on Prospect Road where there has been little impact to the character of the adjacent tree-lined streets. In these streets, occasional infill townhouse developments - which sit comfortably alongside the stone cottages - provide a mix of housing styles and have helped boost the population modestly in recent years.

“Most of my customers are locals who have been here a while and they tend to walk to the Prospect centre to shop or catch the tram to the city”, Evette explains. “Many have told me that they were unsure about the tram and the new developments at first, fearing it would cause too much congestion and lower property values. And sure, apartment living is not for everyone, but most just see the upside and, interestingly, there has been an increase in property values in recent years”, she says. “We really get the best of both worlds here. Prospect is still a lovely character suburb and the town centre is even better now than it was before. I love it.” 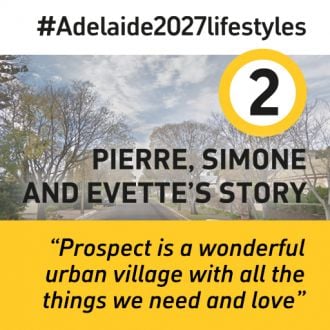