Food is the new fashion

I have previously pondered the death of the food court and the rise of more experiential food offerings and finer dining.

Food is becoming a major anchor. This appears to be a strong and continuing trend. While walking in the city of Sydney, I have come across a diverse and interesting range of offerings, here they are: Kensington Street Chippendale, just behind Central Park off Broadway a row of heritage cottages and their backyards have become a buzzy mix of exhibition spaces for contemporary art and design, commercial space all intermixed with small cafés and bars. Running behind and parallel is Spice Alley adorned with Asian lanterns offering Thai, Malaysian, Chinese and Singaporean culinary delights. Opened late last year, it’s located on the eastern boundary of Central Park and the precinct comprises 16 heritage listed cottages with interconnected courtyards, the funky new Old Clare Hotel and Unilodge student accommodation. It makes you want to be a student again.

The precinct is the brainchild of Fraser Property Group’s chairman Dr Stanley Quek who bought Kensington Street in its entirety in order to create his vision. It’s all about cafés, boutiques, street art, markets and creating an urban gritty experience with its genuine architecture. Go and visit yourself as the photos can’t quite do the experience justice.

I love the fact that the space is so tight and intimate and you have to dodge around diners to get through the alley. I think it’s going to become one of Sydney’s hippest eating precincts.

Another offering bordering on Sydney’s cinema precinct is an arcade of fashion and food retail stretching from George and Bathurst Streets through to Kent Street at the rear. It’s known as Regent Place and this boutique shopping and dining hub has all the feel of Singapore with its bustling food outlets. Customers queue up at most of the eateries for a quick lunch or dinner during work hours or prior to a movie screening next door. It’s also anchored by an Asian supermarket; Daiso. Again the tight space of the laneway adds to the spatial experience on offer.

In the city centre, MLC has upgraded its old food court to a finer experience complete with the new IGA store format in the basement, more in keeping with Thomas Dux and Jones the Grocer rather than the old staid format of yesteryear. The seating areas are broken up into smaller intimate spaces and outlets include Neil Perry’s burger project. The mix is now more restaurants, cafes and bars and extends through to the upmarket fashion retail and Theatre Royal. Timber has been used extensively in the ceilings and furniture creating the warmth that was formerly missing.

Across town is the first stage of Barangaroo’s food hub also known as The Canteen. It is also part of a wider precinct dubbed the ‘’Streets of Barangaroo’’ with a retail, dining and leisure combined experience. It will eventually contain over 50 new food outlets with a diverse offering of high-end dining from Matt Moran’s, to cafés and takeaway outlets. Food will be the heart of Barangaroo along with health and wellbeing services, quirky apparel, lifestyle and leisure stores.

All reminiscent of Melbourne laneways these developments are adding considerably to Sydney’s food and retail culture, clearly spurred on by the proliferation of food and cooking shows on television. This love of food and its experience in all forms is here to stay.

This article first appeared in the February/March 2016 edition of Shopping Centre News. 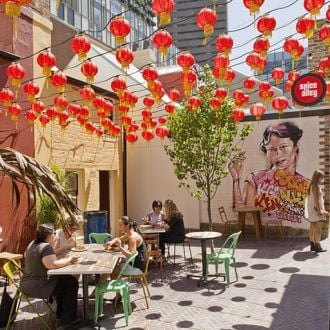