The perils of periphrastic pontification

In 2009, then-Prime Minister Kevin Rudd travelled to Berlin for a meeting with the German Chancellor Angela Merkel. During a press conference, he was asked if there was any possibility of climate change action happening as a result of an upcoming meeting of the Major Economies Forum (MEF).

“It is highly unlikely that anything will emerge from the MEF in terms of detailed programmatic specificity.”

Well, that certainly cleared that one up!

The mistake Rudd made was to resort to jargon as a means to look knowledgeable and authoritative when a simple answer would have done the job. These days, few people are fooled by five-dollar words when ten-cent ones will do, and jargon is all about big spending for a slight return.

It’s something you only have to look into the origin of the word to see: descended from the Old French word ‘gargun’, it literally means the cheeping of birds, and by extension unintelligible, meaningless noise. Jargon is all sound, no substance. It’s baffling with bullshit. It’s posing.

This is a problem that’s by no means limited to Canberra, although politicians are prime offenders (“meaningful statistical downturn”, anyone?). One radio content producer told me with no small degree of disgust that his superior insisted their briefs be “dropped in his creative wok” (“That’s real hot pants,” he commented, deadpan), while a former immigration official spoke of a tendency among his colleagues to call someone “unfamiliar with the veracity of the situation”. British writer Jonathan Clements was once asked to translate an email from a major bank after its recipient was floored by its language. Slashing through the long-winded passages, he exposed the banality of a limp message dressed up as high-falutin’ company policy.

At Hames Sharley, we recognise the problem of jargon more than most, simply because the public often perceives architects and urban and interior designers as exactly the kind of people who will call a spade an individually deployed manual digging implement.

It would be completely understandable for us to feel slighted about that – no one wants to be thought of as pretentious or arrogant – but we’re realistic about it. In any architect meeting, there’s almost always someone playing Bullshit Bingo, mentally ticking off every word like “spaciality”, “biomimicry” and “piloti” – if that’s the attitude from within the profession, how are those outside it going to react when bombarded by latinate linguistics?

Fundamentally, of course, there’s nothing wrong with architects having their own lexicon, any more than doctors or lawyers should be condemned for having theirs. They’ve all studied hard, put in years of effort to become members of if you like, exclusive clubs. Professional language is therefore like a decoder ring, granted only to fellow alumni and creating a feeling of community and inclusivity within the profession. It’s also a shorthand by which fellow professionals can communicate complex ideas without resorting to whole sentences to do it. If these words didn’t exist, you’d have to make them up.

The problem arises when such professionals use their secret language on the uninitiated. While a lawyer can save time using the phrase prima facie to quickly refer to a fact or piece of evidence that proves a fact unless refuted, that time is only saved when talking to another lawyer. Use the same phrase on a layman, and the legal high-flier will only have to waste more time explaining what it means. It stops being about using one word to save time using ten, and instead becomes, to put it bluntly, showing off.

For most people, the use of jargon is something that is largely unintentional – when you employ certain words in the office all day every day, it’s hard to “switch them off” in the wider world. But a great many people still use jargon as a way of exerting influence over others; it makes them feel like the smartest person in the room. Used in this way, it becomes a tool to cow and intimidate, to confuse and encourage passivity. It’s a problem endemic to management, where you’re often expected to action a project moving forward, drilling down until the key decision-makers sunset the task.

It was with this particular usage in mind that the language of architecture was invented. Witold Rybczynski, in a column for Slate magazine, tells of how arcane doublespeak of architects was conceived as a way of setting themselves apart from – and therefore above – normal builders. No matter its practical applications, this rarefied mode of communication was originally invented as a tool of power, authority and exclusivity.

Clearly, however, no one in their right mind wants to alienate their clients with obscure sentences, nor perpetuate the image of their profession as posturing wankers. The key is to foster awareness amongst yourselves and those outside of your employment that there is a basic difference between jargon and terminology. Terminology enhances and clarifies understanding within a certain sphere, a closed loop. Jargon does the opposite, acting as a smokescreen behind which the authority you profess may not be nearly as impressive as you make out. Looked at in this way, jargon can actively undermine your credibility.

Fortunately, it’s a simple enough issue to fix by just being aware of your audience. Be objective about how you approach a conversation. Are you framing your thoughts the right way for this particular listener? Will they be able to follow what you’re saying without a degree in your specialised subject? And on the most basic level, are you using the simplest words possible to convey the information you intend? Because even though you may be addressing someone within your profession, there’s still a lot to be said for plain speaking. Technical words are, to a great extent, like nuclear weapons: it’s nice to have them, but you really don’t have to use them. 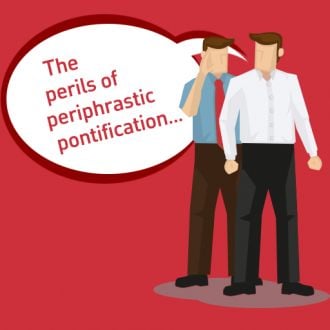