A new report ranking the health of all the counties in the United States shows a huge disparity between the healthiest and the least healthy. The report’s authors write: “The least healthy counties in the US have twice the premature death rates (years of life lost before the age of 75), twice as many children living in poverty, and twice as many teen births compared to the healthiest counties.” The report, published by the Robert Wood Johnson Foundation and the University of Wisconsin’s Population Health Institute, found Baltimore is the least healthy place to live in the US but also found that indicators have improved in recent years.

Is Australia performing any better? Are our cities and states healthy places, or could they be improved? In our follow up article to come, Hames Sharley interviews Australia’s own expert in urban health and wellbeing, Billie Giles-Corti, the director of the McCaughey VicHealth Centre for Community Wellbeing and the liveability index website, Community Indicators, Victoria, a collaborative project within the Place, Health and Liveability Research Program at the McCaughey VicHealth Centre, within the School of Population & Global Health, at the University of Melbourne. 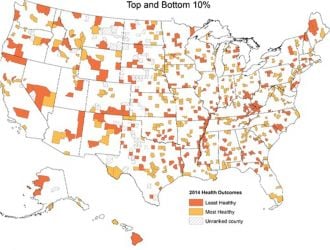