Will families ever buy apartments by choice?

Building apartments for families is not for the faint-hearted, but Melbourne developers, Marcus Lyon and Paul Bell, are taking on the challenge.

The project on Brunswick Group’s drawing board, inching its way through the approvals process, is a complex of 74 apartments, 12 of which have three-bedrooms, private outside spaces front and back, and are positioned on the quiet side of a block in 621 King Street, West Melbourne, just 1.5kms from Bourke Street Mall in the city’s heart.

In the centre of the development is a 500-square metre communal courtyard garden, where kids can play in the sunshine, and there are two community rooms that any of the residents can use.

The question is: will couples with children ever buy apartments?

Apartments are the least preferred housing type, according to the findings of two major surveys of Australian housing preference.

Australian couples with children are categorical – they want to live in a detached house with a large garden for the children to play in, whenever they are asked, according to The Housing We’d Choose published by the Grattan Institute in 2012.

The preference holds true for families in Perth and Peel, according to the follow-up report, The Housing We’d Choose Perth and Peel published by the Western Australian Department of Planning in May 2013.
But Lyon believes there are families who will choose apartments if they are designed well, priced right, and provide the amenities that families want.

FAMILIES IN THE MARKET FOR APARTMENTS

In this case, Lyon’s optimism is also supported by the surveys.

Why? Because both surveys found that Australian families are willing to make trade-offs when faced with real world budget constraints. (See box: What families want most in housing.)

Lyon’s proposed development, designed by Six Degrees Architects, which also designed the family-friendly Heller Street townhouses that sold quickly off-the-plan (see box #2), addresses eight of the top 10 criteria that couples with children name; arguably nine, if you agree with Lyon that by designing cross ventilation into all the apartments, air conditioning (which ranks 10th) won’t be missed.
The spacious garden courtyard, for example, addresses two criteria – a large space for kids to play, and safety. The courtyard garden is fenced so children cannot wander and, with so many residents surrounding the space, passive surveillance will help parents in supervising their children’s safety.

Families like multiple living spaces (3rd on their list). Lyon offers one large open-plan living area per apartment, but the block has two “residents’ rooms” – with tea, coffee and tables and chairs – designed to offset the lack within the private spaces.

Each of the three ground floor three-bedroom apartments has a front and back private space. For the apartments on the upper levels, the aim is to create “terrace houses in the sky”, says Lyon.

There is a roof garden and a deck, planter boxes for veggies, and a second elevated residents’ room. Informal breakout spaces on the covered walkways, with bench seats and window boxes, are designed to encourage a sense of community.

“We are trying to design an environment where people see each other, know each other, where you can also close your door and have privacy. There are also spaces for kids to play,” Lyon says. We are trying to create a mix of three-bed apartments in there, while they are the best part of $800,000 or $900,000 if you are a family, and you want to buy a double fronted terrace, it is going to cost.”

The central position addresses the fourth criteria – proximity to friends and family. Even if family and friends don’t live in the area, most are likely to visit and drop by the ultra-central location.
Without the willingness of the owners of the land under development, the Eighth Day Baptist Church, Lyon says the project would not have stacked up. They have owned the site since the 1860s and wanted the re-development of it to be a “community building, not profit building” Lyon says, forgoing a higher price for the land to achieve it.

This is Brunswick Group’s speciality: improving under-utilised assets owned by councils and community organisations to provide value back to them and the community and deliver a profit for their company.

Lyon and Bell are both former employees of the social infrastructure investment bank, Plenary Group, which funds, develops, owns and manages major works such the Melbourne Convention Centre.

But it was work by the City of Port Phillip, such as building housing over a vacant carpark that sparked the idea for their niche development company. The two bring their expertise handling government and the big end of town to groups unused to the trials of property development.

It hasn’t all been smooth sailing, however, Lyon admits. The development proposal receives over 200 objections from locals, mainly over the issue of height – some parts of the building are six stories. Lyon expects the community will take the developers to the VCAT, the Victorian Civil and Administrative Tribunal. “It’s been tougher than expected, which has been disappointing,” says Lyon, who met many of the objectors one on one in an effort to meet their concerns.

Overall, however, the two innovative developers enjoy what they are doing – breaking the cookie-cutter mould for apartment developments – instilling key design elements like higher ceilings, natural light, centralised services, hydronic heating, no air conditioning, using recycled timber floors and red brick walls. “It’s exciting to create a new project, differentiated from what’s on offer,” says Lyon. “I believe there is a strong market for what we are building.”
Every developer needs to make a buck. Marcus Lyon says that to deliver the key design elements that make this project a community-building, family-friendly and healthy one, and to make a return, there have to be trade-offs.

Box 1 - Making the project stack up

The six-storey height of a part of the building is one element of the profit equation. However, while the community might be up in arms about the issue, few developers would have been prepared to keep the project to the size and scale of the current design.

Offsetting the cost of creating light-filled, spacious and airy designs are the finishes and “everything inside”, Lyon says. “Exposed services, good standard, but no marble benchtops or anything like that. Light, volume and air in the accommodation, but no frills.”

There are 12 three-bedroom apartments, 38 two-beds, and 24 one-bedrooms, popular with young people.
Many factors influence our choice of a place to live; however, couples with children show marked differences from the aggregate results.

Box 2 - What families want most in housing

Children make the features of dwellings a priority, the Grattan Institute reports, departing significantly from the “average” housing priorities.
An old rubbish dump in Brunswick, Melbourne, is the unlikely site for an award-winning townhouse development that has been a hit with families.

Box 3 - From dump to domestic delight

Once a clay pit for The Gilbrook Pottery before it was returned to Moreland Council ownership in 1915, the site is now home to 10 four-storey townhouses, and 18 kids and their families, says James Legge, a director of the project’s architects, Six Degrees, and a resident of Heller Street.

The practice won the tender with a plan to provide the housing as well as a public park, with undulating hillocks, created between Heller Street and the townhouses.

The council had tried to sell it prior to Six Degrees’ winning tender. “They had resistance from local residents, who wanted a park,” says Legge. “But the council didn’t want to take on the risk of remediating the land. We won the tender to remediate the site, form two-thirds into a public park and, to pay for that, develop the residences.”

Legge, who has a young family, designed the residences with all the qualities he and his family yearned for.

“Our generation is finding it difficult to have families near the CBD,” he says. “We wanted to have somewhere kids could run around. I wanted the development to be family-centric, hence four bedrooms with a study downstairs. We wanted to get rid of cars, so as not to have 10 roller doors facing onto the park, hence the battle axe shape, with parking underneath. We had to do so much excavation for remediation; it wasn’t much more to dig a half-basement.”

The excavated dirt was mounded to form the hillocks of the park.

Half “burying” the residences kept the development to 2.5 storeys, and the hillocks create a gentle division between the public and private spaces. There are no front fences. “You can read that the park is clearly public, and on your terrace, it is private,” says Legge. “There is not a sharp line. We wanted a private open space opening to the park, but we had to put in place ways that made it clear you were not intruding.”

The park is well used by the neighbours now that a sign, erected by the council, labels it as a public park.

Legge loves Heller Streetlife. “Having the living areas on the ground level, the kids run straight in and out. We have an open door policy, so there are either no kids in our house or eight.”

Legge says the local residents of Greek and Italian background like to spend evenings on their terrace, exchanging pleasantries with passers-by, and Legge joins in – most of the time. “If it is a beautiful evening, and I have work to do, I sometimes wait ’till it is dark to take out bins. Otherwise, it would take me hours!”

Six Degrees is working with the Brunswick Group on the King Street development. He says: “They wanted it to be different, to encourage community and to enable families to live there if they are interested.” 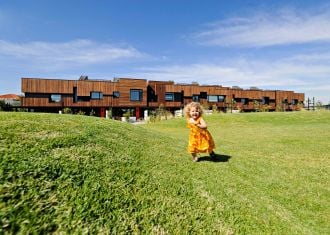